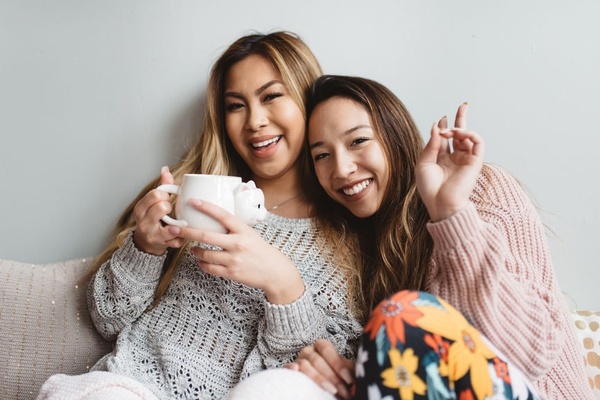 The fall equinox is upon us, and that means it’s time to get cozy. The leaves are changing, the temperatures are dropping, and the sun is setting earlier and earlier each day. There’s no better time than to take some time for yourself and settle in for a night (or afternoon) of new stories, whether you love drama, sitcoms, or a good old thriller.

So, to celebrate the change in seasons, the Cratejoy team’s gathered together our favorite shows to binge -- spanning the gamut from comic to delightfully creepy. You’ll never have that “Now what do I watch?” feeling again... at least until winter.

Tag us on Instagram (#mycozylife) and let us know what you think of our picks! 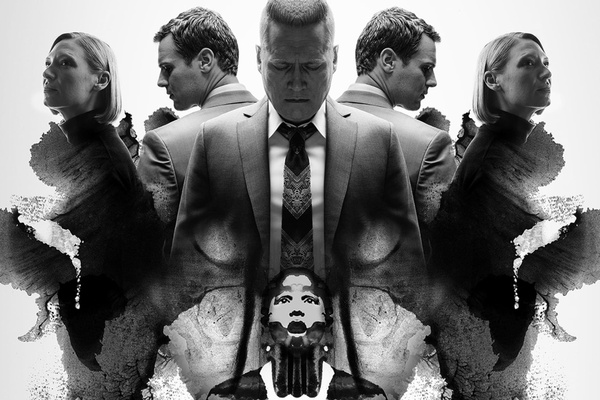 What Makes It Binge-Worthy: This historical true-crime thriller -- about the birth of psychological profiling in the FBI’s serial crime unit -- is gripping and suspenseful, one of those shows where you need to pay attention to each frame. Save this one for a long, rainy weekend afternoon and work your way through several murder-of-the-week episodes with a warm mug of tea (or hot toddy). Perfect for Halloween, of course, but good to binge anytime… just not before bed. 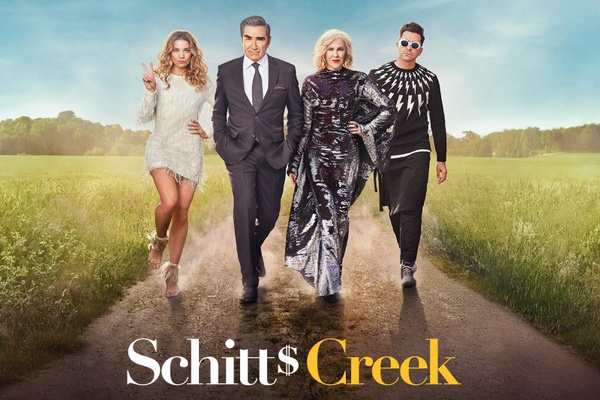 What Makes It Binge-Worthy: There’s a reason this snarky-sweet Canadian sitcom -- about a super-rich family that loses everything and moves to a tiny rural town they happen to own -- is suddenly mega-popular with all your friends. The sleeper hit crosses the silly hijinks of a show like 30 Rock with the occasional, surprising sweetness of a sitcom like The Office or (appearing later on this list) Parks & Recreation. Watch it when you need a bit of self-care -- or simply some good laughs.

The Chilling Adventures of Sabrina 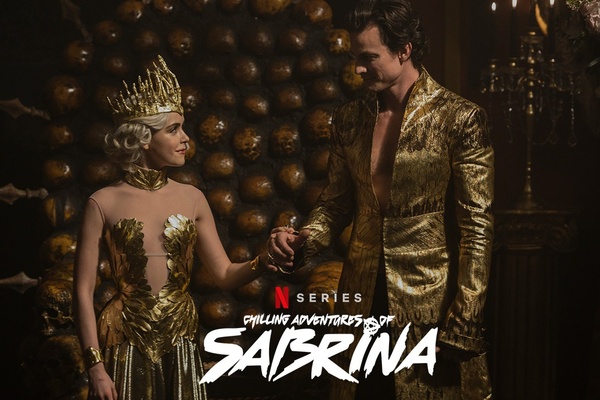 What Makes It Binge-Worthy: This dark, creepy reimagining of Sabrina the Teenage Witch is chock-full of witchy vibes for the changing season. Perfect for October’s cool evenings and spooky ambiance, it’s a great choice for settling in with a snack and your cozy furbaby (preferably, a black cat) on the couch. You might even skip the spooky festivities this year and host a watch party instead. 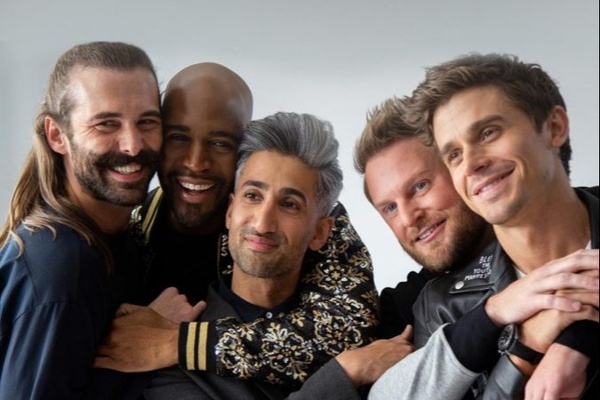 What Makes It Binge-Worthy: Need to unwind? This heartwarming reality series may be, in theory, a makeover show, but deep down, the Fab Five are making over someone’s inner life just as much as their fashion sense, self-care routine, or interior decorating. If the beginning of fall -- and thus the approach of winter -- dampens your spirits, Queer Eye is the ideal way to rest and relax. After two (or eight) episodes, you’ll feel moved, soothed, and renewed by the gang’s perma-positivity. 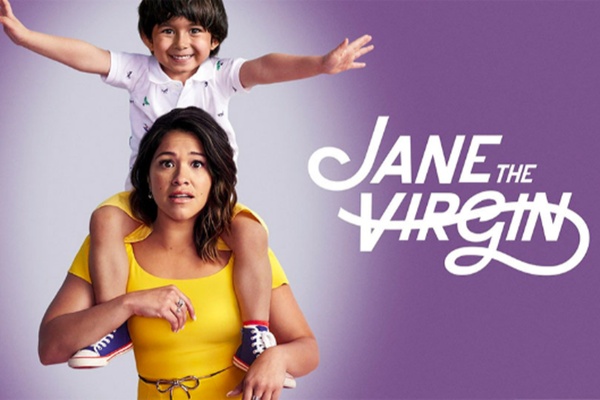 What Makes It Binge-Worthy: This satirical American telenovela about the chaos that ensues when a woman is (accidentally) artificially inseminated by her doctor is charming, clever, and extremely heartfelt. We’re talking about a show in which characters befall fates like “impaled by an ice sculpture” or “discovers their girlfriend is an international drug lord,” and yet the characters also deal on a day-to-day level with the same worries we all have, like where to send our kids to preschool. Completely over the top, but you buy into it because the characters feel real. Watch this with friends or a partner, cozy under a blanket, with a smorgasbord of snacks. 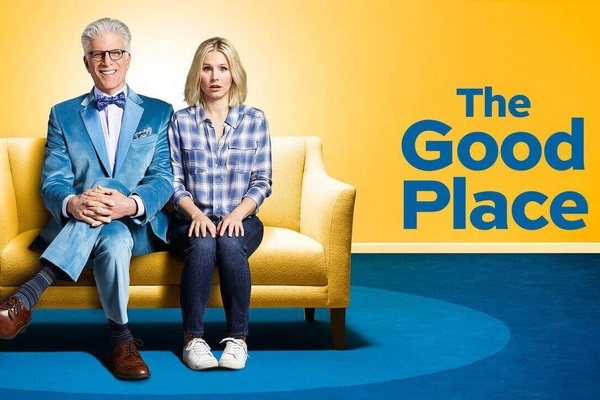 What Makes It Binge-Worthy: This sitcom, the newest show from the creator of Parks & Rec, centers on a woman who ends up in heaven by mistake -- and is determined to stay there, even if she has to (ugh) better herself to do it. No ordinary sitcom, the brilliant plot twists and turns are always unexpected, adding a layer of complexity to the goofy, warm heart of the story. Who knew you’d have so much fun learning moral philosophy (of all things)? Ideal for any evening when you need a break, but just can’t watch any more reality shows. 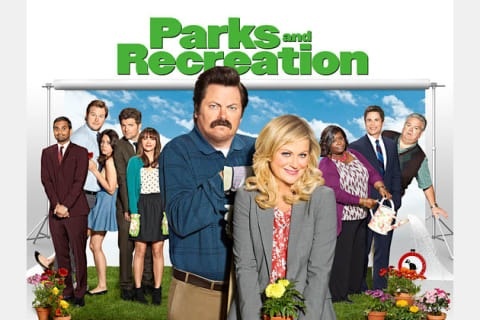 What Makes It Binge-Worthy: This lovable workplace sitcom about working in small town government launched the careers of several actors you know and love, like Chris Pratt, Aubrey Plaza, and Aziz Ansari. If you’re tired of The Office and want a similarly hilarious, slightly earnest comedy, this is the way to go. Binge this show when you’re felled by an early-fall cold, or whenever you need a cozy, comforting pick-me-up. 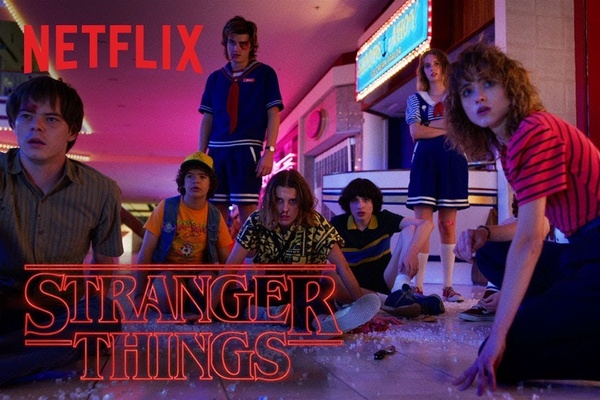 What Makes It Binge-Worthy: The ‘80s-inspired supernatural mystery that everyone loves to dissect, Stranger Things is perfect for the cooler temps and slowly darkening evenings for fall. This clever, funny -- and, at times, genuinely scary -- tribute to the era of The Goonies and E.T. adds a cozy of layer of nostalgia to the rollercoaster of its spooky plot. Good for any Friday night you have free, ideally with some comfort food. 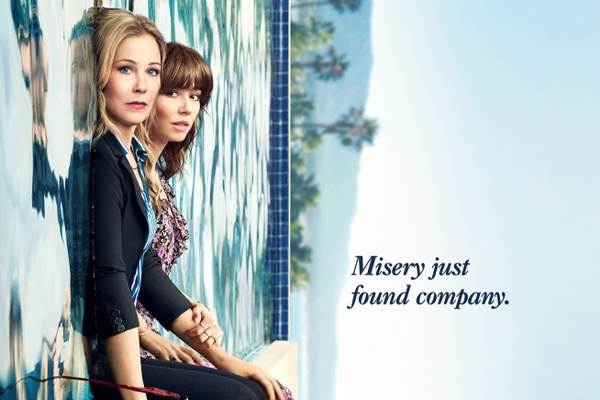 What Makes It Binge-Worthy: We won’t ruin the (frankly stunning) plot twists of Netflix’s suspenseful comic thriller about two friends who meet in a grief support group, but trust us -- the secrets that (unknowingly) bind them together are worth discovering. Do you love the first season of Big Little Lies? If so, this show has your name all over it. Set aside a lazy Sunday afternoon in late September or early October, when the weather has started to turn cool and drizzly, and settle in for a ride. 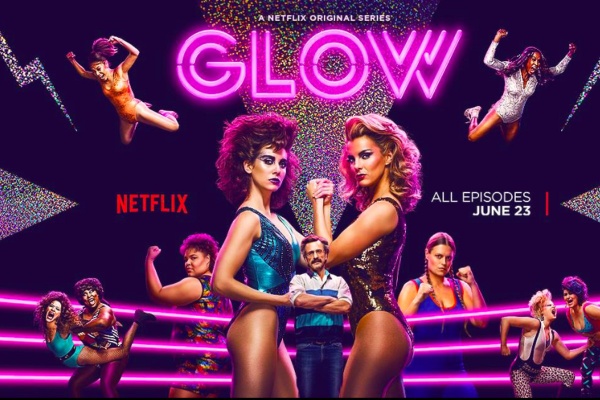 What Makes It Binge-Worthy: GLOW -- which stands for the Gorgeous Ladies of Wrestling -- is a smart, historical comedy about women’s wrestling that doesn’t pull punches. More complicated than you’d guess based on the concept, GLOW is a show interested in grappling with the decisions working women have to make to survive, even if they have to compromise their identities to do so. Come for the costumes, giant ‘80s hair, and goofy spectacle; stay for the story. 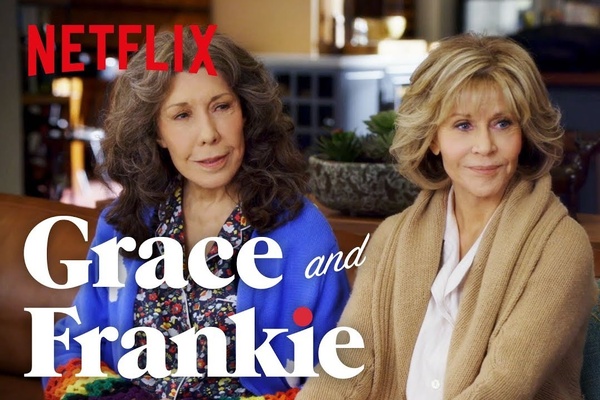 What Makes It Binge-Worthy: Five words: Lily Tomlin and Jane Fonda. In this “odd couple” sitcom, two aging rivals move in together after their husbands leave them for each other. Hilarity ensues, naturally, but so does friendship. It’s the perfect show for playing when all you want is a hot cup of tea and an evening to veg out with your pets on the couch. 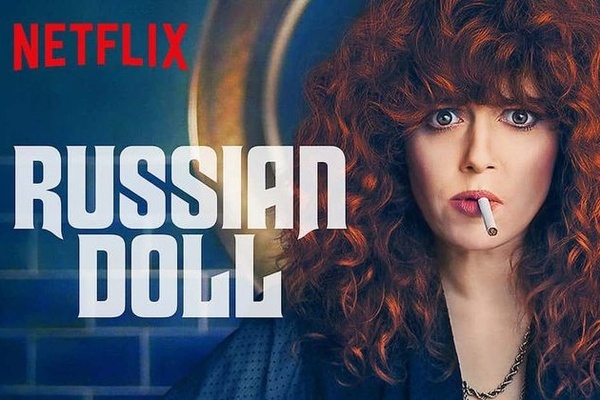 What Makes It Binge-Worthy: Think Groundhog’s Day, but darker, twistier, and more meditative, starring an aimless, snarky woman in her thirties. Natasha Lyonne plays a woman stuck in a time loop, who keeps dying (in surprising and often funny ways) only to return to the night of her 36th birthday party. How she gets out of the loop -- and how she might get out and survive -- makes for a thrilling, thoughtful look at what it means to be good. Watch this any cozy evening after the sun sets early and you’re feeling contemplative about the changing leaves. 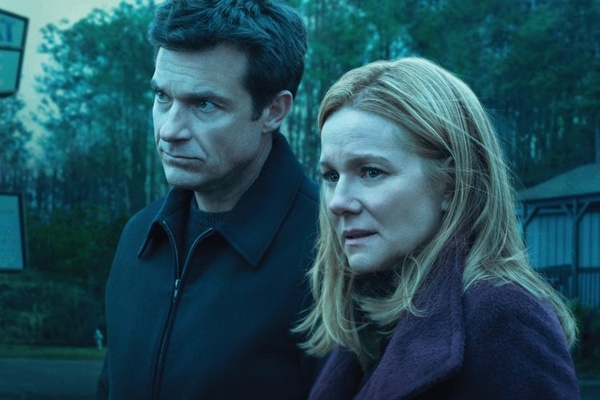 What Makes It Binge-Worthy: If you love shows like Breaking Bad or Bloodline, then Ozark is perfect for you. This dark, gripping drama about a couple trying to hide their money laundering scheme, avoid being killed by a drug cartel, and repair their marriage is near-impossible to stop watching. When you and your friends settle in for a marathon binge, though, treat yourselves to a cocktail: you might need it. 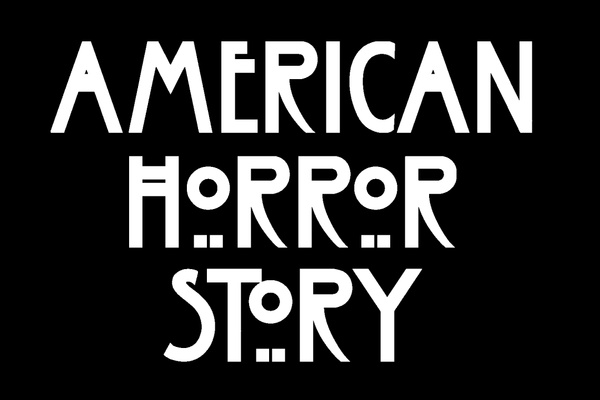 What Makes It Binge-Worthy: Unique among the shows on our list, this campy horror anthology offers 9 stories in one. What’s your favorite kind of scary story? Haunted houses, creepy clowns, witches, a terrifying asylum, aliens, even the Apocalypse: AHS has it all. Wait until the sun sets, then pick your poison and scare yourself silly. Just make sure you’ve got a good blanket to cozy up under -- and cover your eyes at the right moment! (Not that, ahem, we’re speaking from personal experience.) 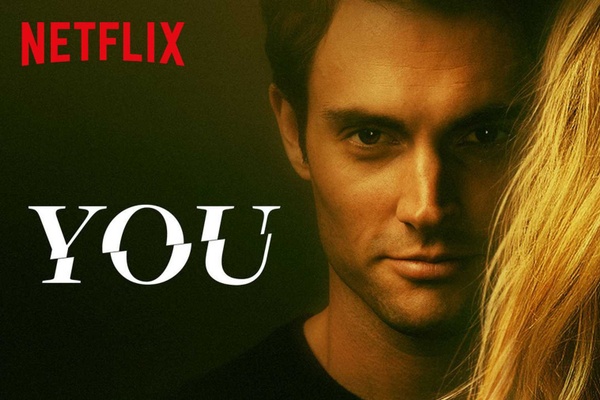 What Makes It Binge-Worthy: This soapy psychological thriller -- about an alarmingly charming stalker and the lengths he’s willing to go to woo his new mark -- started on Lifetime, so you know it’s good. The shocking plot twists, perfectly engineered for maximum drama, alternate between riveting and ludicrous. (Think Gone Girl if Amy were a mild-mannered male bookseller.) In other words, it’s ideal for those days when you want high drama without the headache. Get cozy with a bowl of popcorn and make it happen!

Ready to get cozy? Take a look at other fall finds and start #mycozylife today. 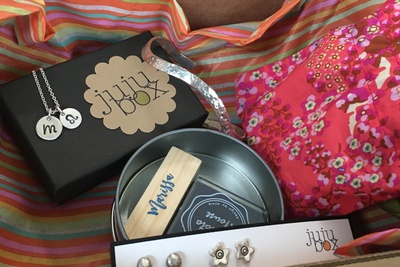 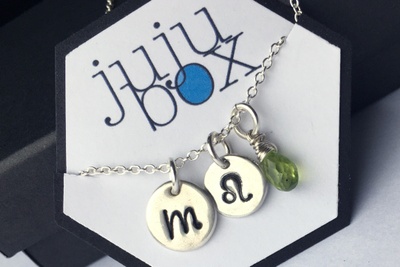 Beautiful, one-of-a-kind, personalized jewelry pieces and other goodies to boost your JuJu!
from $57.00/mo. 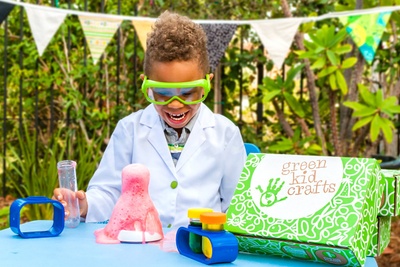 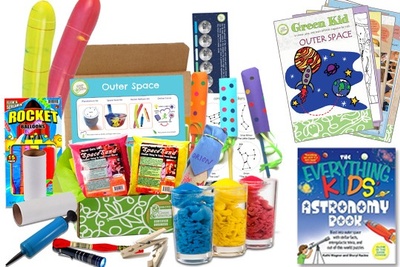 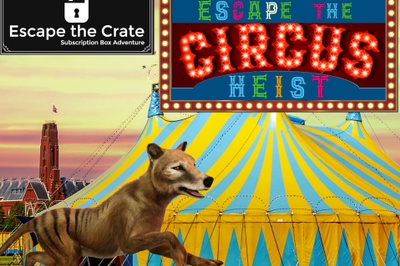 A bi-monthly "Escape Room" subscription box full of puzzles and mysteries to solve!
from $26.50/box
156 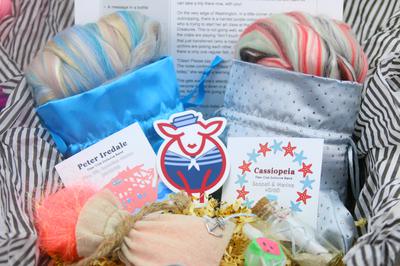 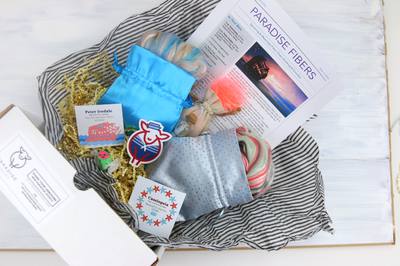 Get inspired with a themed box of wool roving, top, and more fiber for the yarn spinning enthusiast
from $33.17/mo.
5