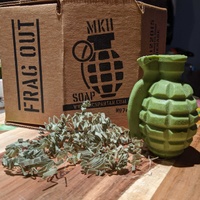 This makes me so happy!

I'm not a review person. I always wondered what makes people right them but the America's Crate I received this month is something I just have to brag about.
The crate arrived in just a plain brown box so I got a little nervous about it but as soon as I opened it the first thing I noticed was how good it smelled. It was really goos so I started digging through everything to find out what smelled that good.
I saw the glasses, the filtered water bottle, and all the other stuff and couldn't figure it out until I realized one of the boxes said "grenade soap" on it. That was it!
I opened it up and it's a bar of soap shaped like a grenade so I took a picture and logged in to write this just so I could brag.