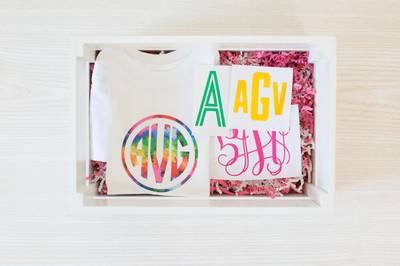 I didn't like the fact that I was charged twice before I received my first box, continuing to be charged for the next month before receiving the current month's box (i.e. I was charged on May 1 but had not received April's box, which I did not receive until May 10). I was also dissatisfied bc I emailed the "Baby Tote Box" administrator with a question 4 times with no response. I finally asked Cratejoy and received a prompt answer to my question. Besides that, the products were cute but I thought a little masculine for a little girl. I also specified that my daughter receive 9 month sized clothing, but received 12 month clothes in each box -not a huge deal... the clothes are starting to fit (baby girl is 10 months old) but the St Patricks Day onesie is a little irrelevant now, lol Thanks for what I have received, but I've decided to cancel my month to month plan.

The monogrammed onesie I received was cute but I thought there would be more in the box. It came with the onesie and some stickers.