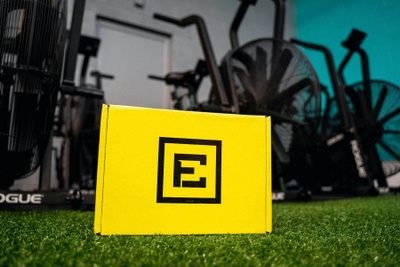 I had used other a couple other fitness subscription boxes before EMOM box, they always started off strong but reverted to being a t-shirt of the month club with a random FitAid or Kill Cliff tossed in, not to mention they shipped out later and later each month, most times I saw the reveal on Instagram before I got my tracking info. This one bucked the trend. I've received every EMOM Box, though I won't lie and say every product was something I desired (though most are) they have always been varied, creative and well worth the price. I think that's what a subscription box should be, covering a wide array to let you see different things. Not to mention that shipping is never an issue, always prompt.
I can't omit the fact that no other box (and few companies in general) have the personal touch of EMOM box. I don't personally know "Eric at EMOM Box" but he's sent me multiple personal DMs and emails mostly just to ensure satisfaction and ask my opinion about future boxes, though I'm sure I've been of little help, it's nice to see a business looking for my feedback without the prompting from a complaint.

This box gets it. All the products in it are things you'll use and the value far exceeds what you'd pay on your own. Great customer service.

Best fitness box out there

Af first I was didn’t know what fitness subscription box I should chose since there is quite a few out there but when I saw and advertisement about the emombox, when they were fist starting out I decided to take a chance and subscribe to it. It was the best choice I made. The emombox has all the best products on the market from some of the biggest fitness companies out there. Non of the boxes I have ever gotten ever disappointed me. Most of the equipment I use in the gym is from the emombox. The boxes when delivered are always in good shape and they get delivered pretty quick. This box has also opened my view to so many cool companies that I have never heard of and I’m constantly on those websites looking for something to buy. The emombox is My go to fitness box and always will be.

PR for a fitness box

I have tried other fitness subscription boxes. EMOM has been the best value and has legitimate products! Worth way more than the subscription price. Other boxes have become repetitive with only supplement samples and promo items.

The best emom i have encountered