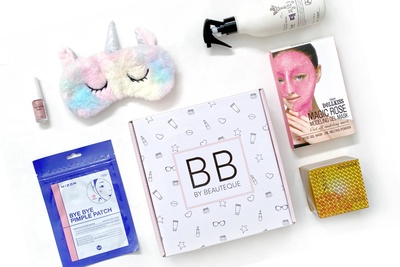 DO NOT ORDER FROM THESE SCAMMERS

They take your money and don't ship your order. I've tried for TWO MONTHS to contact them - no response. This is not the way to run a company. There's literally no way to reach them because they ignore everything, they delete bad reviews/comments on instagram, and they make you download an app to check your shipping, so you can't even contact them.

Not the company they used to be...

I’m updating my review because Beauteque has officially stopped caring about sending their customers the items they paid for. They no longer answer emails or respond in anyway.
Spend your money ANYWHERE else. Two themes down.

FIrst box took almost two months to arrive, second box arrived empty, it says the third box was sent but has not been received there is no phone number to talk to them my account says they are preparing the fourth shipment. Don’t sign in. This was a gift for a friend, I feel really bad.

I canceled this service after trying to get a hold of the company for over a month, i tried email, facebook, IG, messenger and no response. Im currently going thrugh a dispute though my credit card because i did not get a box i paid for. They also do not give you notice if their is a shipping delay.

It has been over two months I never received my December box. Upon request I was given a fake tracking number. I asked them to give me refund, they said yes 2 weeks3. Nothing has happened. I will need to contactthe credit card company.

It has been over one month, I still haven't received my December box. Upon request I received a fake tracking number. I asked them to atleast give me refund, no response from them yet. Very bad experience.

It takes forever to arrive and they don't respond to complaint emails so they charged me twice and didn't get back to me, scam.

before receiving a box. And now the month is almost over....Poor management will not be supported with my money.

Was billed for 2 months and have yet to receive any purchased product... Can't get a reply by email. Have already sent 4 emails. Next stop to my CC company and BBB

Bunch of idiot thieves. Stay away

Hello,
It says that the package was delivered but I did not receive the package yet. Also I have waited for almost a month to get the package. Such kind of irresponsibility is not acceptable. I request a refund for the same. Thanks.

I havent received my box and its been a month now

I live in Germany. I ordered April bag and waited. The gift for first subscription arrived on time but the package didn't. Moreover I can't complain to Dpd, because looks like only the person who sent it, can do it. I also ordered May bag, what was really stupid, because it didn't arrive either. Fool me once shame on you, fool me twice shame on me... On tracking site it's written that second package is in Germany in transit since almost a MONTH.
I've written a mail describing the issue but since 2 weeks no one reached out to me. I tried contacting them on their Facebook page but no one responded. I don't know if they're taking care of this or don't give a damn.
So I give 1 star because for me it was just a waste of money and nerves, and because there is no contact with Beauteque monthly.