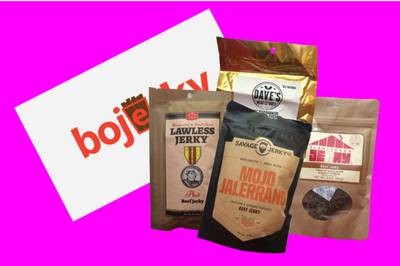 I bought this subscription box for my dad for his birthday, and he liked it so much more than I even expected! He is hard to shop for and has a tendency to leave movies, books, etc. gifted to him unopened for YEARS, so I wanted to get him something that he could consume and be done with. Every month he tells me about which ones he got, which are his favorite, and how he loves having something to look forward to like this! (which is unlike him!) Love it - the gift that keeps on giving!

If I could give 0 stars I would

Used a Groupon I received as a gift in December. Specified I didn't want the subscription to renew because it was a gift. They renewed it anyway. After several emails to them I finally received a response about a month later that my subscription will not be renewed. Great, problem solved right? Nope. They kept my money they auto charged and haven't responded to the many emails I've sent to be refunded. On top of all that I just received the final shipment I ordered in December, it's June by the way, and the jerky they shipped was the same as the last month. Please do not order from this company there have got to be better people to give your money to.

So far, not so great.

I ordered the subscription for my husband for Christmas. My first two months went without a hitch, however I have had nothing but disappointment since. By the first week of April I realized that we never received our March box. I sent an email and was just given a tracking number. Throughout the month of April, I continued to send emails asking where my March beef jerky was. By the first week of May, I still hasn't received March or April. I email once again asking for a refund for March, April and now May. I was told that they could not refund me and that my orders were coming. I finally received March's shipment, in MAY. One week later I got my April shipment, in MAY. Both of those shipments had the exact same beef jerky in them. To send so much on a product and get the same thing twice, six weeks late. I am extremely upset. I sent yet another email about my displeasure and have not gotten a response. This company has the worst customer service. DO NOT order from them. You will spend a ton of money and get awful service in return.

Paid for two months of double shipments, and two months later received nothing. Contacted them 8 times, got responses 4 times. Like they literally ignored me when my boxes weren't arriving even when they knew they messed up. At long last got a refund after some of the worst customer service I've ever seen- the kind those over seas knock off companies get away with because you bought something for $1. They say the demand is higher than they can keep up with! Yay, they eventually explained the situation and I was fine with that. But a month after not doing anything about it, it seems like a fraud situation. I don't appreciate being scammed; a little communication goes a long way. There are lots of other jerky box options out there. Skip these guys til they can get it together.

I ordered this as a gift for my nephew for Christmas and after 2 months reached out via email because no product was ever received. They claimed they had a delay in getting their supply and we should receive something “soon”. One month later, still no product or any further communication. I followed up again and requested my membership be cancelled and they refund my money. They cancelled my membership but claim they can’t refund my money because they are processing my orders now. Horrid customer experience and I wish I saw the other reviews before I purchased.

I ordered a 6 month subscription for my husband as a Christmas gift! He absolutely loves beef jerky and I thought this would be fun for him! I WAS WRONG!!!! He received the first month box, but didn't receive month 2 or 3. I emailed to inquire about our subscription and a few weeks later he did receive two months of jerky. However, he never received month 4, 5, or 6! I would NOT recommend this subscription to anyone!! HORRIBLE!!!!

$64/lb is the rate I just paid. That is absurd even for premium jerky. I should be getting four 6-oz packages for $37, not four 2.3-oz packages. And this month he was so lazy he just sent four different flavors of the exact same brand. Bravo on your jerky curation. Terrible.

Stay away from this Company

They never delivered the jerky box I ordered for my brother in law. I sent 2 emails and never got a response. There is no phone number on their website to call. I ordered a 3 month subscription for husband at the same time as my brother in law's box. He received month 1 but still hasn't received month 2 (its been 2 months since the last delivery). This company should be shut down by the better business bureau.

Never got a shipment

Three months of subscription paid for and never received one item. Sent several emails and so did cratejoy and no one ever contacted me back.

Ordered my Bojerky case on December 3rd of 2016 for a Christmas present. Was told on December 18th that the box would ship that week. After sending out multiple emails, was finally given a tracking number on January 17 where I was told that my box had shipped out, but the tracking number never updated. When I asked for a replacement box and then later for a refund, they stopped replying to my emails. Ridiculous. Having to dispute the charge on my credit card now. Don't get scammed.

Taste it or you miss it

Bojerky sends me products I otherwise never would have tasted. Well I consider myself a food critic.. I need to say that they exceeded my expectations. Memories revived ..

I signed up for bojerky w/coupon and was really worried that initially didn't work but they ended up talking me through it almost instantly after I emailed them. Great customer service and a really cool selection of jerkies makes this a 5 star rating.

We get all the bo-boxes sent to us. I just wish they offered a deal for combined shipping- maybe soon?

I got the opportunity to try new flavors every month because of Bojerky. Thank you very much for that!

Gifts made easy with bojerky

My brother loves jerky so gifting this was a no brainer. I got him a years worth and when I told him, he was floored.