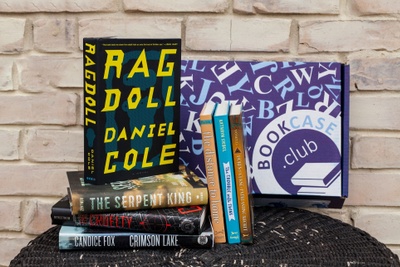 by BookCase.Club
Great monthly books delivered straight to your door!
★★★★379 reviews
Plans as low as

I've gotten three months of books (6 total). The positive: all books are hardcovers in great condition and in the genre I signed up for (thrillers), the subscription price is more than reasonable, and I received a quick email response when I contacted them; the negative: the books I've received are 3-4 years old by unknown (to me) authors/titles with very mixed reviews on Goodreads. These are your typical bargain table books.

I resubscribed to this book box because I like how they choose some authors that aren't as well known/popular, and did enjoy the surprise of what books I received relating to the genre I liked. I was so incredibly happy with previous subscription boxes from this company & was beyond stoked to get another one, only to open this month's box and find a sequel in there. Was pleased with the other book I received as it was just more appealing and in my opinion related better to the genre chosen (teenage dreams) overall fits better with the other books I've received. Anyways, I was so disappointed to find this sequel in there for a book series I'm not all that interested in and would personally never buy the first book, let alone if I was interested in the book, wouldn't want to spend even more money just to be able to read the one sent to me. Really wish they would've just stuck with two completely stand-alone, not-part-of-a-series books. I wrote an email to the company inquiring about their return policy and if it was possible to return at least one of the books as it was poorly curated, they responded with "guess we'll tighten our guidelines on that and work on not putting in sequels. And, we have a no-return policy for books that don't really appeal to the reader." Never getting a subscription from them again unless something changes here.

I didn't have much interest in the books I was sent. I selected the crime/mystery/thriller box and all of the books were very obscure and more science fiction.

Thank you for your feedback, Amy. We hope next month’s picks are more of your style!

Not the best book selection. They were in good condition and worth way more than the cost of the box, but I'm not a fan of the authors whose books were selected for me.

The box is decent, but not great. It calls itself curated, but you can't tell - the included card literally has nothing on it but an abbreviated version of the book synopsis on it. Don't expect any explanations as to why the books were picked.
The value is decent - about the equivalent of just going on to bookoutlet.com and buying two books there (these are remaindered copies, so it's an apt comparison)
I found it a bit more complicated than I'd like to change the theme of the box, so it may not be the best bet if you like to jump around genres.
Finally, all these reviews in the past few days? They're running a giveaway where you're entered if you leave a review, so you may want to take a look at them with a grain of salt.
All told, this is not a bad option if you want a no-frills box, but I'd probably suggest going over to Book Outlet.com instead.

The latest two selections are both interesting, and I look forward to reading them. Thank you for the male authors.

I have been a member for two months, and have mixed feelings.
Be advised that the books, at least the ones I have received, are remainders and have the red remainder mark on the bottom.
They are also not recently published, but have been from one to several months old.
Still, the price is reasonable for what you get, and the main benefit is in discovering books and writers you might never have otherwise discovered.
I plan to continue at least one more month, and see what comes next time.

Wrote that I received wrong case . Have eaited for two days still no reply.

Get what you pay for

I did 3 months, all the books had remainder marks and mixed reviews, obviously stock that stores couldn't push. "note" to subscriber was always horribly pixellated and often the synopsis they gave didn't do the book justice. My last sci-fi/fantasy box was the best of the three, but overall I was disappointed. These aren't curated or expertly chosen, just non selling overstock.

Ordering is confusing and they charged me double the first time but they fixed it, I hope the books are new and recent enough that my gift recipients haven't read them. shipping seems pricey.

If you're looking for a cheap box with new authors, this is the subscription for you. The package always came on time and they always leave you a little note. Overall, the box wasn't bad. It wasn't my favorite but you can't beat the price.

3.5 stars
We got off to a rocky start. My books had been packed incorrectly and were stacked on top of each other long ways in the box with a LOT of room to move around during shipping, which resulted in damage. BUT, Bookcase Club redeemed themselves and sent me a replacement box. I've since reactivated my subscription and will give them another chance. I will say that in both boxes I received, there are no new releases (1x 2014, 2x 2015, 1x 2012) which is a bummer because I'd already read Girl on the Train. I think changing that would make this box a MUCH bigger contender.

A little let down this month...

I have been very happy ith this subscription, but was kind of let down when I received The Girl on the Train. That book was HUGE a year or two ago. Everybody that wanted it already has it, I'm sure. So, kind of a bummer, but excited about the other selection in my box!

Received my first box, already own and read one of the books, and the second will probably give away. It would help to give one NEW book and one older book. Since most of us that would even get a book box subscription are avid readers, there is a chance we are gonna have or read both older books you send. I think to include a newer book,(current year, or 1 year old) would make the box more worthwhile and appealing. Will give this subscription another try next month, then decide.

Two of the three books were cartoon themed which doesn’t really work for my 2 month old. I was hoping for more beautiful picture books that are timeless. The third book was a medium quality picture book which I was happy with. I think I will regift the other two.

A little let down this month...

I have been very happy ith this subscription, but was kind of let down when I received The Girl on the Train. That book was HUGE a year or two ago. Everybody that wanted it already has it, I'm sure. So, kind of a bummer, but excited about the other selection in my box!

You get what you pay

The shipping is great and all but the books are not pretty accurate for young teens. I expected books teens are reading at this time. Not sure I'll order another box bit I'll see in the future.