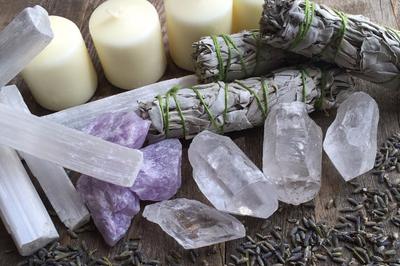 Every freakin crystal box sends the same crystals, every freakin month!!!! Thank you, I’ve got PLENTY rose quartz, amethyst, pyrite, labradorite, jasper, onyx, clear quartz, citrine, selenite.... & I’m guessing just about ANYONE interested in crystals — collecting them & learning about them — is familiar with these & the other basic, boring, everyday, easily identified & found crystals & gems in this & every other crystal box out there. Seriously, I mean, that’s pretty obvious & logical, right???? I don’t want the stones & crystals I can buy at truck stops & tourist shops... intro me to something I didn’t discover by the age of 10!!!! ESPECIALLY in these more expensive, higher end boxes!!! I’d gladly take fewer obscure pieces over getting 10 rose quartz & amethysts EVERY MONTH!!! (This review is also posted for all those other boxes, too).

I paid for this subscription February 7. I was told I would receive the March box, which was fine, but by the time March 10 came around for the next billing cycle, I still hadn't even received a shipping notification or acknowledgement that I should be expecting a package. I let that be and allowed myself to be billed for April's box. I then got a shipping notice later that day. I checked the tracking for three days and it still said it hadn't done more than print a shipping label. My package was shipped out March 13 and didn't arrive until March 18. I was emailed twice before even receiving the package to review the box, saying it shipping on March 10 (when the label was simply printed then and it didn't ship until the 13th). The contents were two crystals, a sage smudge stick, and a room spray. I was pretty disappointed in the value, as I didn't want any kind of room spray and would have much rather had more crystals or an additional smudge stick. I have allergies to many scents so I picked this box to avoid wasting money on something I can't use. It's a bit too much money for such a lackluster assortment. Hoping my April box is better.

Nice but not my favorite

Crystals and creations did a great job labeling and packing each individual crystal with a great detailed card. I was disappointed in the overall quality of the box. The necklace was very cheap looking and just not my style. I think I need to be more specific when I purchase. The kyanite was broken. It might add up to the retail price but the retail price is way over priced. I’m being pretty particular about my crystal subscription boxes and this is definitely not the worst.

The necklace is pretty but I thought it would be better didn’t seem worth the price. Hopefully next month is better or I will be canceling my subscription 😩

Decent box but a little overpriced

I liked the variety of items in the box but I was a little disappointed that most of the crystals are very common and I can easily buy them in toy shops or bookstores.