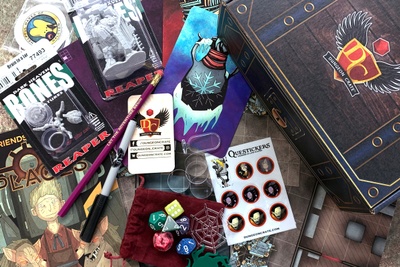 The items in this crate are definitely quality products. Unfortunately, they do not coordinate together in any fashion. It feels more like they are working to promote their sponsors than to please their subscribers.
It's also frustrating that, for two months in a row now, my crate has arrived AFTER the renewal date, forcing me into another renewal before I have the opportunity to evaluate the worth of this subscription.

I subscribed when Dungeoncrate went active and it has been average for me. I loved the 2d figures from the 1st box and the Advanced Deployment plastic items (including the dice tower). My main gripe is the load of miniatures that seem to be dominating the crate. My group uses our imagination instead of miniature setups. There has only been 2 adventures in 6 crates. The coin in every crate does nothing for me.
As of right now, I am on the fence about keeping this one. If you like a visual game, I would say jump on board. For a more mind's eye style, this may not be for you. With all the miniatures they are adding, maybe a crate with paints and brushes would be a good choice to have in the near future.

We really wanted to enjoy our Dungeon Crate subscription. The wife and I ordered the first (and second) box, but cancelled thereafter. Neither box was worth anywhere near the claimed retail value and more importantly, didn't deliver on what it promised. They've taken down the original pictures of what they were going to put in the boxes, but it was originally meant to include lots of 3D cast pieces. In two boxes, only one was sent. Google if you're curious what I mean.
There's just nothing to get excited about here. Some of the stuff is okay (the coins, the quest deck, the shotglass, and the 3D cast of the fountain), but the majority is trash and not worth my money like 2D figs, bookmarks, cheap dice (2, not even a set), stickers and buttons, and virtual goods such as coupon codes to redeem downloadable adventures or maps.

I really don't feel I am getting my money's worth with this box. I get small goofy trinkets that I probably will not use. Part of your box is digital, so it really feels scarce and unsatisfying to open. I hate to say this but other RPG boxes are much more satisfying and like you actually get more than your money's worth or more. But for Dungeon Crate... I definitely got a big disappointing "that's it?" in my mind after both of my boxes. The support is really, really fast and nice, but it doesn't make up for the fact that it feels that it feels like you get 10 bucks worth of stuff, tops. And also there's collector's coins in the boxes? I hate them because it feels like they take up the space for something actually useful, which isn't actually the case but I'm feeling burned at the moment.