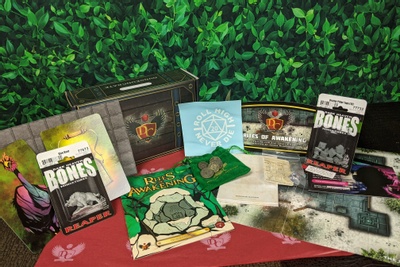 Fun box with interesting items! Gonna take them to my next game night and show the group!
Thought about sharing but they can get their own box!

As a hobbyist role player, finding a crate program for RPGs was exciting. Other "nerdy" crates often have too much fluff and not enough substance.
I've gotten three crates from Dungeon Crate so far, and I haven't been unhappy with any of them. The first and third crate were better than the second one, but partly that's from personal usefulness.
The crate sub is pretty expensive, however, and though they list the prices of everything in the crate and how much of a discount you are getting, I do feel like it's right on the edge of value. If every crate felt to me as the second crate did, I would probably cancel my sub, even enjoying it as I have.
In each crate there are generally 2-3 things that I'd consider the main event. Often these are like card decks, miniature terrain, and such. There's also the ephemera; dice, bookmarks, pins, small adventures, etc. So far I have found use for a lot of what is in the crate, with some even inspiring me to try new things at the table. The best things I've gotten so far, in my opinion, are the ArcKnight Flat Plastic Minis, the Critical Deck sample and table from Nord Games, the Quest cards (can't recall the producer currently), and any of the plastic terrain (I believe it's laser etched).
That being said, I would recommend the crate in it's current state to a hobbyist RPGer more than a more casual (not meant in a bad way) gamer....

I understand there is a direct connection between value for my dollar versus profit versus satisfaction, It would be naive to expect $100 worth of items for a price of $25 but in this my FIRST crate, I didn't FEEL that I broke even. I will reserve my full judgment until next month when I receive my second crate, stay tuned.