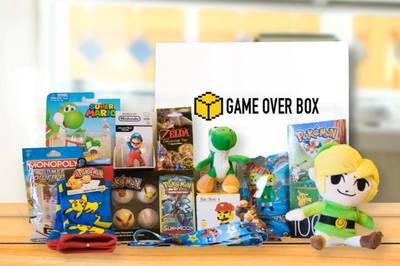 by Game-Over-Box
A monthly Nintendo subscription box!
34 reviews
Plans as low as

My son loved the box. Great surprise for him. I would have liked to see one or two more items offered in the box.

The box I received these items in was abysmal, with tears in the cardboard, tape hanging everywhere, the shipping label nearly detached, barely any tape used to seal it on the top and bottom, and one of the items was even sticking out of the bottom of the box when I received it! Also, I don't like receiving subscription boxes without packing lists, because I don't know what was originally supposed to come in the crate and I may be missing something. Still, the 5 items I received were in good condition, most of them were official, most were the franchise I specified, and the value exceeded what I paid for the box. If they'd just pay more attention to their shipping, I'd have no problems. Also, maybe include more options for shirt sizes.

The shipping was horrendous, but I did end up getting the 2 boxes I was supposed to get. The value of the box was definitely lower than the asking price, but I ended up liking everything that came in the box even if some of it was a bit cheap. I'd recommend this box if you don't mind waiting 2 months to get your first box.

Looks great but I can't get it!

I was about to order but I realized it only ships within the United States. And I live in the UK.

Ordered from the website but found I can write a review. Im not a huge pokemon fan and a few things were pokemon. I wish i could tell them that what games i want. But i liked it other than that