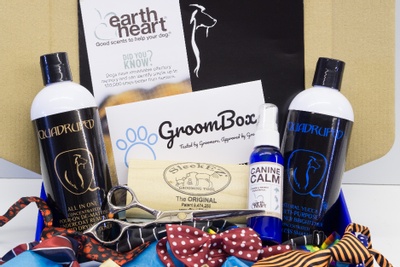 by Groombox
A monthly subscription box for Dog grooming supplies and pet groomers! Get your box of awesome!
★★★☆50 reviews
0Buying Options

Probably 1 product out the 5 items I received I will ever use. The brushes were inexpensive/poor quality. It also took a while to come in. I’m going to keep the subscription for a month or two to see if they are any better. I was looking forward to shears none came in this box, this was the reason why I chose this one over others.

First box was great second box was not

The first box I received was great. Nicely packaged with great shampoos and cute holiday bows. The second box look like someone just threw random stuff in a regular box. I got a bunch of things that I will never use and nothing was really great quality. I was really disappointed with the second box especially because this subscription isn't cheap. The stuff I got seemed cheap and I could have bought all those things for less then the cost of the box. I will be cancelling after this. Not worth the money.

I'm a dog groomer And I was hoping for better stuff in my box. Maybe next time...

Was going to give 2.5 start but won't let me. My first box was great. Second not so much Combs shampoo I won't use and bows. third had thinners and clot it. And bows the same I received last month disappointed..(Halloween). So instead of getting Thanksgiving for Nov. Guess skulls it is for Thanksgiving. One more month than making a decision on it. I only is certain shampoo so it's useless. The scissors are great I loved the bows for Halloween but twice now. What am I supposed to use for Thanksgiving....

Okay products. 1st box wowed me and then went downhill from there. I have enough pairs of scissors to last forever! I'd love to see more variety.

Got the small box w 5-10 items! 4 bandanas,shampoo,cologne and a happy hoodie. Will try again but this was not worth it bc only one bandana was cute.

I have gotten the Groom box twice. The first box was nice and I was happy with the selection of items. The second box I was not as happy. I received duplicate items and cheap items I could have purchased on my own or have seen in the dollar store. I signed up for a year subscription and am hoping that the selection of items going forward is better.