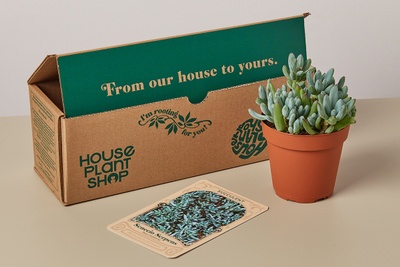 I’d love to give a great review but my experience has been awful. My very first box arrived with a Bird of Paradise and a simple Bamboo plant. Both plants were in soil that was overwatered and they had root rot and fungal gnats. I sent pictures and the company promised to replace the BOP only. I never received a replacement and despite canceling my subscription was charged for a second box. Edit: second box arrived: plants in disastrous condition. Over-watered to the point of rot again! Dracaena Marginata with white mildew covering plant; Palm Areca with black tips. Buyer beware.

I bought this subscription as a birthday gift for my mother who loves plants and has a green thumb.
The plants in the order arrive in bad condition, damaged and nearly dead.
We tried contacting the seller 3 times by email and never received a response!
What a waste of money!

My plant arrived dead. All the stems were broken. Wasn’t packaged for shipping very well at all. I’m attempting many things to save it. It was my first one too so I was pretty disappointed. I’ll give it one more month before I cancel to see if it’s better next time around.

I was super excited about this, but the first month of my subscription they sent a pretty basic plant, snake plant, which i already have a bunch of. Can’t complain too much because it’s still a plant and all plants are awesome, but it was delivered to my mailbox at 6pm and left in freezing temperatures until i was able to get it after work at 9 pm, but the plant had already frozen and died. I guess i should cancel this subscription until the summer months, or it would be nice if you had to sign for the package or something so it’s handed directly to you rather than sit in a mail box in cold climates.

Good in theory, bad in practice

It’s a great idea in theory but bad in practice, and the plants picked out seem like they would be nice. But they’re always dead by the time they arrive. Also the way to open the box is opposite of the air flap so dirt rains down everywhere while you try to get the box open. I’d love to see this work but with the way it is now, it’s not working 😢

Plant arrived completely out of pot, soil everywhere in box. I purchased a 3 month subscription. I’m so bummed

Arrived out of the plant pot

THe product arrived out of the box and the plant was destroyed. I would like a refund.

Nightmare. I ordered 2, 3 month subscriptions, 1 for each of my daughters. I thought this would be a great Valentine’s Day gift. One of my daughters received their plant and this is what she got! Dead. She tried to revive...nope. Got a notice at the same time that my other daughter should be getting her plant too. Nope. Still waiting over a week later, may be two weeks? The daughter that received the dead plant filed a complaint and a new one was shipped. Still waiting. Grrrrrr....

I've received two shipments from House Plant Box. Both have arrived dead and we've been unable to resuscitate them. Customer service did provide a refund for the first, but it took several rounds of emailing (there's no phone number to contact them). Still waiting for a response on the second dead plant (received/reported one week ago). Seems a waste to kill little plants like this!