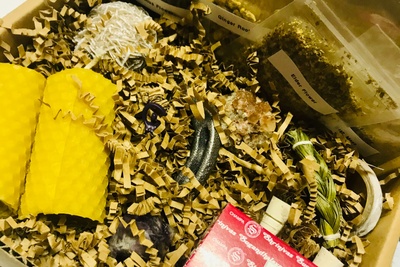 by Kay's Magic
A box filled with magical items from across Texas (and the world) starting at only $5 per month!
★★★☆☆117 reviews
Plans as low as

I got the $10 box. I only just started a few months ago. I absolutely loved my first box, but it was delayed due to the storm, which I understand, but they were also very late putting it out, otherwise the storm wouldn't have delayed it anyway. The second box came when it should have, but the quality seemed less. Still waiting on my third box, or even a response about it. Started reading reviews, and so many people have had the same problems, and some even reported getting nothing ever, or being charged twice. I'm already at a point where I'm stressed, and losing even that small amount of money is something I just don't need. With all the other problems I've had, I just don't feel very confident in this company, and I am about to cancel. I'm really sorry this didn't work out. It gave me a little something to look forward to for a couple months, but now I'm just worried about if I'll even get the last two boxes I paid for.

what is going on

I've written 2 messages & recieved no respones. Can you please let me know what is going on, I purchased a box in March for 100 & haven't received my first but was charged another 100. So I've paid $200 and received no boxes or any communication.... that's super frustrating. Although I'm super excited for this box im becoming weary

I loved the box, unfortunately for me it's the lack of customer service. I never received my May box, I was patient and sent emails trying to get it corrected. This had happened once with my first box and no issues were had. They shipped the missed box with no issues...This time nothing happened. I emailed every account they listed on their site, through Cratejoy and the emails I'd received from them. They refused to acknowledge a single one and one blocked me immediately. I contacted Cratejoy customer service for assistance and Kay's refused to answer them as well. The lack of any type of response is ridiculous.

The customer service at Kay's Magic is the worst I have ever seen because it is NONEXISTENT. I have reached out four different times and have gotten no response whatsoever. I am considering canceling the box because I have yet to receive a box from May. No one ever reached out to say the boxes would be late (or never show up seeing as how the tracking says it still hasn't been shipped from May 11th) but they did have an announcement on their website...I guess that's enough? Anyway, I keep reaching out about whether I am getting my box or a refund for it and no one has ever answered any of my messages. Worst customer service. Obviously, I like the box but I feel cheated out of my money.

The contents of the box were find and my friend was very satisfied with the items she received over her three month subscription. However, this company’s communication is dismal. The giftee did not receive their third box and tracking shows it has not yet been sent to the shipping carrier even after almost two months. I reached out to the seller via Cratejoy twice and sent emails to their customer service division twelve times but never received an answer with respect to my issue. I would love to rate this box higher, but seeing as my giftee only received 2/3 of their subscription with 0 attempts by the seller to make this right, I cannot.

It was a def a tiny boxes.

What a complete waste of $50. I got a handful of mini samples, some tea, loose incense and a black t-shirt. Don’t waste your money on this box. I should have heeded the warnings from box reviewers on YouTube.

I read a few reviews on the Texas which box which were not very good but I wanted to try it anyway for myself. I got the $10 , 3 month pre paid box to try. Also my first box took so so long to arrive in part that was due to weather. Anyway, overall it just seems like "a very basic, generic, low quality items box" Some of it looked dated and labels faded as if sitting around for a while. I don't really know how to describe it, just things that were suppose to have a nice scent didn't and they just smelled a bit bland or waxy. Hard to explain. The stuff I got in my $10 box I could buy independently and put together literally for about $5 or less. I guess you absorb the shipping cost in your price, so it's really more like a $5 box with $5 shipping. I don't know maybe I need to get the most expensive box to get a better deal but I just was not impressed and unfortunately canceled my 3 months subscription. Maybe I'll try again in a future and things will be better.

As much as I do adore the items that came in my box, I know for a fact they are not worth the prices listed. 25 dollars for a dropper bottle of blue moon water? 4 dollars for a single tea light candle? 3 dollars for one sprig of rosemary and one stick of cinnamon? 10 dollars for 3oz of bath salts? 13 dollars for a 1oz tin of spices??? Again, really did like the products, and I understand you have to make a profit, but we all know you can get a dropper bottle for 5 bucks and use tap water for moon water.
Really hope you might come out with something that has more value because, again, I really did like the items I got, but the value just isn't there for me..

Not Worth the Effort

I went back and forth with continuing the box for a while. I feel like it was typically a miss with the item received with one saving grace. There's usually one big ticket item and a bunch of very small packets and tea lights. To me it never seems the total of the items is really worth what you're paying for. The last box was a huge disappointment. The "big ticket item" being $26 for a few ounces of moon water? I make that myself felt that was a bit of a ripoff to have that be the featured item of the box. I gave them one last chance this month but Kay's has constant issues with sending their boxes on time. This box's schedule is all over the place. They basically will ship out whenever they want to vs adhering to the schedule they've posted. I'm constantly charged for a second box without receiving my first. Communication with them is lacking. I've messaged them several times about shipping and they'll respond after several days, if at all. I have several other witchy boxes and I feel the money I spend on this one is better spent elsewhere. The effort with trying to keep up with if this box is actually going to arrive or not is exhausting enough, It's a constant issue and not worth the items that are sent.

I got a small candle with a stand, a stone and cone incense. 4 items. They say you get 4-6 items so it was pretty anticlimactic, not to mention the candle was broken.

I guess you get what you pay for

Got my first box today. The entire thing was filled with lavender products which I am highly allergic to. I knew there may be one item with lavender but never expected EVERY item to contain it.