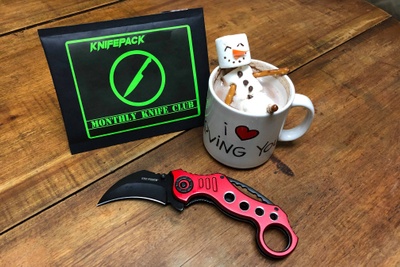 GIVE A UNIQUE GIFT! - FAST SHIPPING!

This is fraud I ordered this as a gift they have not received any boxes and I can not get anyone to respond back to my emails and CrateJoy is not helping me either total waste of $60 don’t make the same mistake it did ;(

I ordered this and wrote to the seller multiple times. I never once heard back. The seller never shipped the knife and never responded to refund the money. If you order this subscription be ready to lose your money. You will not get the product and they will not respond to you. Order a different knife or tactical box subscription instead.

Couldn't tell if the knives were good or not. I've made 3 payments that they have gladly taken and not a single knife have I saw.

It's impossible to get ahold of these people. No one will respond back. I ordered a knife through their website in June and they took the money but I've yet to receive it. I've been with them for almost a year and almost all of the knives I've received are very similar. I have even received the same knife just in a different color. They are decent knives if you like practically the same one over and over.

Horrible minus 5 stars if I could . I ordered on the 20th of sep. I waited patiently till the 2nd of October to send an email.... I received a response the next afternoon from Lindsay said it was her job to make sure I was taken care of... She said they were moving buildings and that is the reason why my package was delayed. But it had been processed on the second and I should now see it in 7 business days. I waited 9. Before I emailed again 6 days in a row I emailed with no response. I still have not received a response an FU or my knives but they sure did take this months payment. I have cancelled and have found a WAY better compamy .....if I could find an address anywhere for these knife punks... The BBB would be contacted

I got a subscription for my son back in September.. After multiple attempts to get the package shipped to me.. He finally received it. I spoke with the company and they said they were a small family owned business and that they'd just switched to a new system and working out kinks.. So I told them if my son liked the knife he got, I would resubscribe because at that point I had canceled the subscription. So it came and he liked the knife so I resubscribed as I said I would.. This time I have emailed multiple times and reached out to the company on Facebook trying to get the knife.. Still nothing. At this point I've been emailing everyday trying to get a refund! Beware of this subscription service! They do not deliver as promised!! If I could give them zero stars I would but unfortunately I had to give at least one.....

Got nothing put of two payments. No answer when I tried to contact customer service. Waste of money.

I have contacted seller twice. I even went to website, but could not find phone #, for customer service. I have not recieved any form of communication. My bank account got charged 19.95, over a month ago. This just makes me mad.

Shipping is so bad

So I subbed back in October and they didn't hold up to the fact that it was 2 days after first order you would get it so I emailed them and they said it was because they were moving buildings, So I let it be and received my item on the 27th I think I ordered it on the 15th of October and got it the 27th but I decided "Well they're moving buildings so why not resub next month." And that's what I did on the 15th of November and now its the 2nd of December I emailed them 2 weeks or so ago asking where it is and I got no response. They don't hold up to the shipping terms that they said, So be careful.

Does not ship in timely manner

Ordered on Oct 2 as a gift for my nephew. They state that they ship first box within 2 days of fist order. It is now October 17th, and it still has not been shipped out. I ordered this for his birthday, and he still has not gotten it. I am cancelling my order. I end email a few days ago, and have not heard back.

Well for one, didn't get my first package as quickly as advertised. It eventually came though so no big deal. However, have had for two months and both knives they sent me could be purchased online for well below the price they are charging. The last one was a $6 POS. Cancelled and will just pick my own knives for now on. Do not recommend.

This was the biggest mistake I have ever made in an online purchase! I have been a member since March 2018 and literally almost every month I have had to contact this company to get my monthly subscription knife.and it has been horrible to even do d a way to contact them and when you call them from the # on Facebook that number is no lo get in service and when you message them on Facebook you have to message them several times to try to get any repsonse. It is now July 22nd and I have not yet received my July subscription box and have been told a couple times when someone has actually answered a message and said it was on the way on I believe that was July 11th and then last week I was contacted by them asking how my product was and a shipping number they sent me has said it is a pre shipping label and not yet shipped from the 11th and i still have not recieved anything from last weeks communications but they have no issues what so ever about taking my money but when it comes to them shipping out what you ha e paid for that is a huge issue for this company! Don't get suckered in and waste your money with this company because if you do just message me and I can ha e you we d me the no 1st and go...

If you notice the only "good" reviews on here are not verified. 20$ for a "create" that has zero effort put into it. If I could give zero stars I would. I didn't even give this as a gift like it was intended for because the quality is so poor.

Ordered this 6 month subscription as a gift for teen son in December. Received the December one but no January one. Have contacted them with nothing resolved. Just have a disappointed child because he was promised 6 monthly shipments for Christmas and siblings are all getting theirs(thankfully from different companies that actually honor what they say). Would not order again. Horrible service.

I would find another subscripting box to order from..this company sent me a damaged product that was a Christmas gift then they promised a refuND and would send out a new not damaged item in place of..also said would give the person a free month but never followed thru with any of those promises....this company will not be in business long if this is how they go about handling customer issues and complaints...don't waste your time or money...moving on

Shipment in 2 days is a lie.

1st shipment was NOT in 2 days. 2 knives in 4 months. Not what the shipping details on site states.

Only rated 1 star so i could leave a review.

Knives never arrive they just take your money, DO NOT USE

I canceled three months ago and they are still taking the money out of my bank and not sending knives. Very very unhappy with this group

The first few packs kept coming late, but when they finally did arrive the product was fine. Though not worth the cost. A few months in I took to much money off my card so the box declined, when I realized what had happened I went in and manually canceled it. I have since had to go in and manually cancel it three times because they kept charging me. When I told them I don't want the subscription but it kept being renewed without my doing they basically told me it was my problem and they wouldn't do anything about it. Do not use this service, the product are average and the service sucks.

Had problems in June with our 1st box. They cancelled my box after I paid. I contacted them and they claimed they cancelled it to prevent fraud claiming I used 5 or. 6 different credit cards to pay. I didn't use any bc I went thru Cratejoy and they use the one I have saved, the ONE. They agreed to send the sub after that. Now it's July and nothing, I don't hear from them and no knife. So, I contact them, no reply. Cratejoy had to step in to get them to move. They charged me and sent me some bogus email with tracking numbers that says it's in pre-shipment. That was 10 days ago and still no movement. Then I get an email asking how I like my knife! I like it delivered! CANCELLED!!

The first knife we ordered was great and quickly received... I even wrote a great review and they sent me an email thanking me and promising something "extra" for the nice review. We have since been billed for two more months and NO KNIFE (let alone free extra)! I have shipping info that says the label was created but never shipped. I have attempted to reach the company four times about it and have gotten absolutely no response! This was a gift for my son for his birthday, and he has been terribly disappointed! Thanks for being the worst birthday present ever!

Ordered a 3 month subscription in June recieved knife within a couple days. Still have yet to recieve a knife for July. No response to emails...

My husband loves his knife. But, this company is in the practice of charging my account before they ship anything. I was charged in June and have not received anything, a month later. Then, I was charged, again.

I ordered a subscription received one month was charged for another month and never received it. Now it's not even showing up on my subscription list for me to do anything with. Like cancel or find out where my product I paid for is!!!