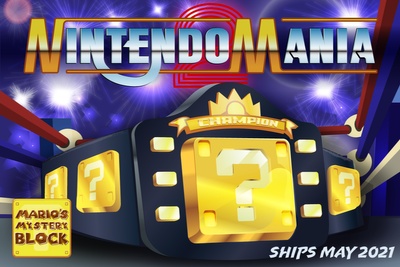 by Mario's Mystery Block
A monthly themed Mystery Block full of awesome & fun surprises from the entire world of Nintendo!
58 reviews
Plans as low as

I subscribed for 3 boxes and unsubscribed. Only one of the 3 boxes had anything Mario related. I guess should have read more into the description of the types of items they ship. The name of the mystery box is a little misleading and there should be some considerstion to a name change.
The customer service is amazing and will respond within 24 hours if not that same day. We had a few problems with tracking numbers but the customer service representatives were on it!

I got this for me and my boyfriend, we liked it but we just wish it was more interesting with more stuff with characters like Luigi and daisy. Othe
wise it was fun.

First, the good points. This box does offer a good amount of customization. I ordered a Zelda box for the Wii era, and that's exactly what I got! A box full of stuff themed around Zelda games of that time. And it was ALL Zelda stuff, so no Mario or Pokemon or anything else snuck in there. And, despite me paying about $30.98 including shipping, the items WERE of greater value than I paid, according to similar items on eBay and Amazon. So this service DOES prove adept at matching the customer's specifications and giving them good value items. Plus, the box design is cute and the green shredded paper did match the franchise's cosmetics.
Now the bad points. The stuff included is your standard Loot Crate-esque filler. In the box I received, I got a set of cheap pins, some socks, some mints, a plush toy, and one of those tag blind bags. As I said, based on pricing I looked up and what the Nerd Store down the street sells stuff for, the value DOES match what you pay for. ...But this is it? No POP figure or DLC or tin or bag or hat or figurine or just something out of the ordinary that you wouldn't expect in a subscription box? Just some stuff you'd find hanging on the rack next to a checkout at Toys R Us? ...Despite the out there design of the website and box, there's not much identity to this subscription. Also, while checking...