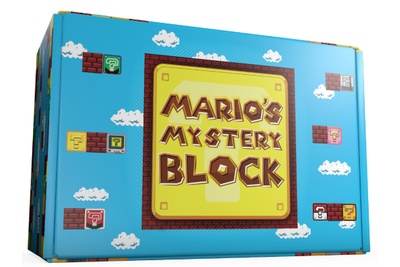 by Mario's Mystery Block
A monthly themed Mystery Block full of awesome & fun surprises from the entire world of Nintendo!
★★★★☆73 reviews
Plans as low as

Gave a 4 because the shirt size is way too big for my 9 year old son. But otherwise the box was great. He even got two ambios

I didn't realize I would get no actual Mario items. Luckily my son likes animal crossing though. My biggest problem was receiving a wii u game. A game that is literally only playable on an old outdated Nintendo system. My son was very bummed. Otherwise, it was a hit and perfect for my 6 year old video game lover.

Great value for the cost.

My son liked receiving this box. We ordered a 6 month subscription as a Christmas gift for him. So far he has received 4 boxes. The first three had t-shirts in them, which he loves, and the most recent one had a cozy blanket in it. He was super happy about that as he loves cuddly blankets! Overall, not a bad subscription box.

Each delivery was full of fun and smiles from my grandson. Great value.

I liked what I got in my first box and am looking forward to the rest of the year. I liked the T-shirt and socks that I got. The soft switch case and amiibo were pretty neat as well.

Initially we received a plain cardboard box instead of the special Mario themed box that the subscription is supposed to come in. I reached out to the subscription team and it was apparently a manufacturing issue for the month. I was initially disappointed with the lack of transparency with this issue and that they just send a plain cardboard box without any explanation- however they did send me a Mario themed box after I asked for one and made it right. They also followed up to make sure the box was received. Overall satisfied with the quality of what we received for the month (hat, stickers, and some miscellaneous small items).

So far my son has been quite pleased with the contents of his boxes. Even when converted to Cdn dollars, it still has been a great value. Most recent box that we're still waiting on has been delayed quite a bit, but the company did send out a courteous email letting subscribers know the reason behind the delay. Overall we are very pleased with our subscription and will continue subscribing.

Pleasantly surprised each month so far

I have been subscribed for the last 2 months, and I am about to receive my third box soon. I originally signed up for myself and my 5 year old niece. She and I share a hobby of collecting Nintendo merch, and playing the games. So, for that purpose this box is great! The first months box was a bit bigger than the second, but I suppose that's to be expected, as each months theme varies, and the items values change as well. That being said, in my experience so far, the items definitely justify the monthly subscription price, as far as an itemized breakdown of cost per piece. The only con I've experienced so far, and maybe its just my opinion, but I've noticed several items in the second box I recieved, which was an "original gameboy" theme, had a couple items that were custom, a gameboy t-shirt, and a wooden laser cut gameboy pin. Both items are cool, but instead of the shirt reading "gameboy" or something relevant, it just said "Mario's Mystery Block"..... same with the pin....I understand marketing, but I didn't subscribe to promote your company, I subscribed for Nintendo based items and clothing etc. If you want to throw in a business card or sticker, for the purpose of me possibly displaying it somewhere, fine. But do not use two of the items I paid for, as a giant promotion. Especially since that was the first shirt I received, and now have...