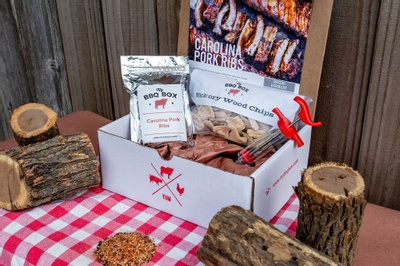 by My BBQ Box
Monthly BBQ box includes a custom rub, detailed prep and cooking directions, and a BBQ accessory..
★★★☆15 reviews
Plans as low as

I bought two different subscriptions to this box - one for my brother and one for my best friend. My brother loves cooking and he really enjoyed this gift box I sent him. He was really impressed with the detailed instructions and said the recipes were awesome. My best friend was obsessed with the rub. She said there was a good amount of leftovers and she put it in everything: pita chips, hummus, dip. Would definitely purchase again!

First box: Georgia Pork Butt. The rub and recipe were great! Although, more messy and time consuming than I thought it was going to be. It came out delicious! I never imagined being able to smoke a pork butt on my gas grill. I really appreciated receiving the basting mop, as I did not have one, and it also came with a can coozie. I do wish there were a month to month plan rather than making someone choose a term plan. The cost could be lower or include shipping.
Second box: Austin Beef Rib. Just received my box today! I can't wait to make these and they sound a lot less messier than the butt. It came with a digital meat thermometer, recipe and a package of the rub. <3

The bought this as a gift for my father-in-law. Absolutely loved this as a gift. The boxes were delivered very timely and were nice surprises each month. The variety of runs and wood chips made the boxes interesting and wanting more. I believe I’ll be buying another subscription for myself. Highly recommend at least a 6 month subscription to really get a good selection of products.

I have been BBQing for years and but I have always used store bought rubs and they never tasted right. My meat came out good but not great. My BBQ Box took my BBQing skills the next level. The rub is nothing short of incredible and the recipes are on point and precise. Basically, this has given new energy to my BBQing hobby and inspired me to explore new areas. Love it and I would like an opportunity to buy the rub separately after I run out.

I received a monthly subscription as a Christmas present, so I have been getting these for 4 months now. Well, I live in Georgia where the weather has been unusually, let’s just say not good. So finally, last weekend I had the opportunity to do one of these up. I chose the Georgia Pork Rub (go figure). Now, included in this box was a large bag of rub, a very nice cotton basting mop (which is awesome cause I didn’t have one), and some very good directions. So, I am a novice at bbq, I can grill and cook but never really got into bbq and smoking. This recipe has definitely changed my mind. If I had no other bbq to eat ever again, I would be satisfied. The directions were simple and not too complicated and the final product was better than I could ever have expected. Being new in this realm, I had a couple of hiccups along the way. I found out that the thermometer on my smoker was off about ¾ of the way through so it was taking longer than expected. I ended up stopping short because of time and ended up with sliced rather than pulled, but I would do it the same way again without flinching. Because of my timidity, I stuck with a milder apple wood than the recommended hickory (next time I’ll try the hickory). I also underused...

I love My BBQ box! The rubs were so good I even put them on baked chicken and it turned out spectacular! Then later when I had time I followed the detailed instructions to be a real bbq-er and that was even better.

I purchased this for my Dad for xmas this past year. He loves it. Without fail I always get a call shortly after his box arrives to tell me what he got. He said it really "upped his game".

My kids got me a subscription to My BBQ Box for father's day this year and I received the first box in time to cook brisket for the 4th of July.
I have a Traeger Elite grill and have done brisket a few times, but was never really satisfied with the results even though I was very careful to follow the prescribed techniques. Don't get me wrong, they were great, but not as good as I expected based on the results I had with other meats and methods.
The July box came with the following:
- A generous portion of Texas brisket rub; no sugars added, just salt, various peppers and herbs ( I like the no sugar approach )
- An application shaker for the rub
- A beer koozie ( at least that's what it is in Texas :-) )
- A bunch of american flags ( very patriotic, thank you )
- Grilling instructions; these were well written and easy to follow
I followed the provided instructions, which I adapted a little for use on my Traeger, and BBQd a 17lb+ brisket. 17 hours later the results were better than I expected and arguably the best brisket I have ever managed to produce. My family really enjoyed it and so did some of my co-workers that I provided lunch for the following week.
I had written brisket off my BBQing list, but its back on now.
Thanks for the July BBQ Box and I'm looking forward to what August will bring. BTW,...