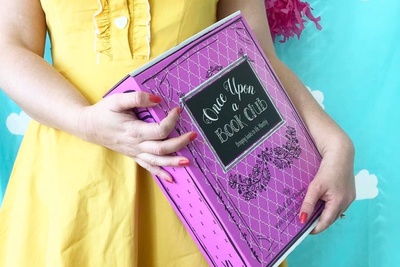 by Once Upon a Book Club
Creating a unique reading experience every month by bringing books TO LIFE!
★★★★365 reviews
Plans as low as

Worst customer service ever. Shipping takes ages - 1-2 month AFTER the payment. It happens every month. They keep sending emails saying that it’s not their fault and it will be only this month. But it happens every month. And it IS their fault because they order the cheapest possible gifts from China, and very later for them to be delivered on time.
As for the book selection, for 6 months it was only 1 good book that I likes. Others - romance vanilla that I would not have chosen for myself.
Gifts: cheap, unusable though-away type.
Overall: it’s not worth $45.00 a month.

I bought a subscription for my mom. She received an email from this company saying "Your Adult Box is On the Way!" I received a copy and our first thought was I had somehow ordered her a sex-toy subscription. She then opened the email and saw it was for an "Adult Book Club", so thought it was for an X-rated book club. How embarrassing! This is not a conversation you want to have with your mom, or the kind of gift "surprise" you want to give to most people. They really need to change this and to me it speaks of sloppy writing and review. On top of this, the first box was a month late! I received numerous emails with "updates" that didn't provide clarity on when she would actually receive the surprise, and it was way after intended time. And in the end, when my mom got the box, she said the couple of "gifts" tied to the story definitely weren't worth the money. Definitely NOT renewing or giving to anyone else. It was a great idea, but execution had major errors.

Hi Jamie! Thanks so much for your feedback. The box you ordered was our Christmas box which featured "In a Holidaze" by Christina Lauren which is known for their sexy novels. This title was revealed in October when the box was listed for sale. Additionally, our Adult book club is always offered for ages 18+ and can include violence and/or sexually explicit content. We do not include gore, extreme violence, or intensely graphic sex in our regular monthly adult box, but in our limited edition boxes where the title is revealed publicly, we make exceptions as our subscribers can conduct their own research on the novels prior to purchasing. We apologize if this information was missed and we hope she enjoys her December Adult box...

Great Box but ALWAYS VERY LATE! I've ordered it twice for my daughter and it has been almost a month late both times. What's in the box is great and she really enjoyed the YA book that was chosen, but it's been an almost 2 month process to get one box when they promise a monthly subscription. I ordered the second box in March and its the middle of May and I still haven't seen it. And their excuses just sound like poor planning and organization. So, if you want one, order ahead or expect it late.

Have not received. Ordered in march .mailed out end of month .didnt mail out .now says will receive by 26th of April.then email saying wont be sent out until 28th. 45.for 1 book and then it still says preparing . come on .i can go buy the book at store .bad customer service

First of all, we loved the subscription! I ordered a three month subscription for my daughter for her birthday but it wouldn’t cancel after MULTIPLE times of me checking and verifying a cancellation. It kept reverting back for some reason. I don’t know if this is a Cratejoy issue or Once upon a Book Clubs. What I do know is I now have a total of $86.98 of unauthorized charges. I was planning to do another three month subscription for her for Christmas but I’m SO upset over this.

I have done 4 of these boxes, and each time I ended up hoping that the next time would be better. It never was. I have enjoyed the book selections, but the gifts...not so much. Which in the end makes it a VERY expensive paperback...approaching $50.00 when factor in shipping. I appreciate the thought that went into the gifts and the presentation, but the gifts are mostly very cheap stuff, like obviously made in China quality, and of the four boxes there is exactly one gift that I liked enough to keep. It does add to the reading experience, and makes it exciting, but ultimately I end up feeling let down. I just wish that the gifts could follow the story AND be something that I would actually use.

Good book, but no.

Loved the book choice, but wasn’t a fan of some of the extras included. Included a wine opener set (already had one because most adults do), a little tea bag and ceramic tea bag plate (wasn’t sure what it was for, but did like this one because it was cute), what looked like a small binder with a weird clip that was damaged (again, no explanation as to what it was for), and a letter that went with the story, but I struggled to read it due to the light print (plus it was verbatim what was written in the book, so unnecessary). I’m going to cancel my subscription because I didn’t feel like the extras included were worth what I was paying for the subscription box and I have a bookstore in town if I want to buy myself a new book.

The book I received was fantastic. I couldn't put it down. That is pretty much as good as it got however. It took 2 months to get to me as it was delayed 3 times. I expected the items to be pretty darn good for them to wait this long to send them out because that's what they were waiting for....the gifts were not. I liked the first gift with the apron but the measuring spoons and cups looked like something from a dollar store. The bracelet was poor quality with a piece of metal on it that had gold paint that was bubbling and peeling. The bracelet also was not something as described in the book....the letter gift was just that....a paper letter. Yeah it seemed pointless when I already had a copy IN THE BOOK. The candle gift did not smell good at all. Overall I wouldn't recommend this to anyone and I probably won't order another. The book was fantastic however, for spending nearly $50 I can get another book box with really good books as well that have higher quality items.

I got two boxes. The first box, I was not a fan of the book. The 'gifts' were great quality, but also not my style (regiftable though!)
The second box, The book was much more enjoyable, but the gifts were despicable. The first 'gift' was literally a post it note with a string of numbers on it.

Hi Olivia! Thank you so much for your feedback! We typically always include a paper item in our monthly boxes, as frequently letters, photographs, or other paper items are vital to the plot of the novel we've selected and we feel it's important to bring to life for our readers so they feel as though they're in the moment of these scenarios. While these items may not have any monetary value, we hope that the experience of pulling out a slip of paper at the same time as the character creates a value in the experience for you! Additionally, we hope the rest of the gifts were ones you could use and appreciate throughout your daily life! - The...

I have nothing to be happy about because I ordered this the beginning of August and here we are beginning of October and have never received a thing!

The concept for this box is really great, but unfortunately the box I received didn't live up to expectations.
The good: As I said, I really like the idea of waiting until certain pages of the book to open a wrapped box. It was exciting, and kept me reading. The best part is that there are little post-it stickies on the specific page to remind you to open your box. That definitely takes a lot of work, and I admire the dedication from the curators!
The bad: The book itself (The Last Piece by Imogen Clark) was terrible. It has a 3.89 rating on GoodReads and I honestly have no idea how it could have achieved that. The prose was extremely pedestrian, the plot was completely predictable, the characters were one-dimensional, one of the main characters was downright unlikable, there was a bizarre twist towards the end of the book that was not explained at all and just accepted as normal by the rest of the characters, and after 2/3 of the book I basically just hate-skimmed it to get to the end. I read like a self-published Kindle free-book by a talented amateur writer who never met an editor.
The gifts in the box were either uninteresting/cheap or only loosely tied to the book, which I think undermined the concept of this box. There was only one thing in the box that I ended up keeping (and it definitely wasn't the book itself).
Overall, a good idea that is lovingly,...