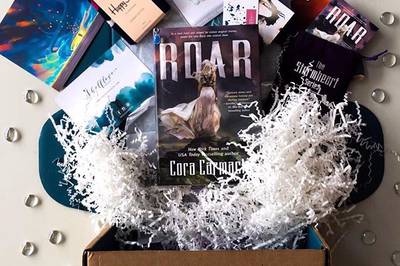 A monthly fantasy and sci-fi book box for young adults!

After watching a bunch of youtubers open this box and falling in love with the items I thought I would give a try. I think their products are beautiful and well catered. However, this book box has the WORST customer service I have ever experienced. It took them a month, a MONTH, to fulfill an order I placed with them and then once I got it, it was missing an item. Not once did the customer service team contact me to let me know that their shopify was experiencing problems. I had to contact them to see what the hold up was and I was notified by some guy that they were having difficulty fulfilling orders. I would say you subscribe to this box with the risk of never getting it. I am STILL waiting for the box I purchased.

Hi Reyna,
First let me say we are taking your review very seriously. We sincerely apologize for the delays you have experienced. To that end we are looking at ways to better streamline our procedures and processes. We value you as a customer and strive to be transparent about keeping our customers informed. We have not met your expectations and again, we are sorry to have fallen short of what you expected from us. Thank you for your patronage and best wishes that we see you again.

Thank you from us at Shelflovecrate.

I ordered this subscription before Christmas as a gift. Although it says the boxes are shipped on the 20th of the month, it is now February 8th and the recipient has not yet received anything, nor have I received any notification about the shipment. Not very confidence inspiring! I'll wait to see if I get a helpful response from my question to the seller. If not, I'll be requesting cancellation and a full refund. I hope it works out, as the recipient was really looking forward to getting her box.

Slow. Others with better service

Terrible. Cancelled subscription before all had arrived. They don't ship until the 20th of each month. They tell you that up front. What they don't say is how long after it has "shipped", it will finally arrive. Ordered first box on 11/23. It arrived 4 days after it shipped. 12/17/18, got an email stating package was on its way. It never arrived. Decided I was not a fan of the lag on ship time and wanted to look at a different company for future subscriptions. Cancelled the subscription so that my card would not be charged again. Got an email stating my prepaid shipments would still come, but none after that. I never got the second shipment and they never sent out my third. Will never do a subscription with so few reviews as a gift for my kids again. Lesson learned. Hopefully I will get my books or my money.

I do not recommend SHelfLove as I have been very disappointed with my ShelfLove subscription. In February 2019 I was signed up for my first box but, due to my own fault, I only received the book [I’d accidentally signed up for book only]. The support staff was very helpful and had that three-month subscription canceled and was signed up for the actual box subscription staring in April. This is where the issues began.
March of 2019 there was an issue with the items; apparently the mugs were broken and they needed a new shipment, hence a delay. Total fine and understandable. Weeks later, when it finally did ship, my tracking was “pre-shipment” for over a week. I emailed and was assured my box would be there soon. Nothing. A few days later I receive a mass email saying the shipper messed up and the boxes were never shipped. Eventually everyone got together and shipped the March box. Received it in April.
April comes. EXACTLY the same issue. My shipment is listed as in “pre-shipment” for over a week. I email and am assured at first that the boxes have shipped and my tracking will update. Received a mass email on April 30th saying there was a “stock error” and items were “held in customs.” The email assured that they were “extremely frustrated at this time, and can assure you we have been working with our new packing facility to prepare to make the move as seamless as possible.” It...