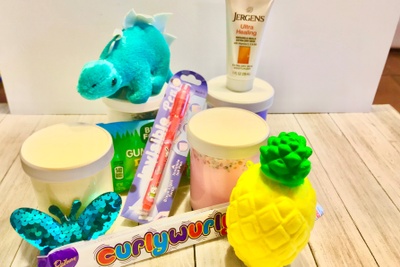 by Slime
The First and Original monthly subscription box for Slime Lovers.
★★★★☆108 reviews
Plans as low as

We cancelled after 2 boxes

I cancelled after we received our first shipment, but by that time we'd already been charged for our second. The slimes are okay, but not great. Everything else is total junk. One small piece of candy, a white plastic bead necklace and a weird green, fuzzy/furry mustache (that I thought was at least a sticker, but it wasn't.) Our first box wasn't any better. All comes loose in an unpadded mailer, and ships very slowly from the time your card is charged.

I was unimpressed with the entire “bag”. First, the item was received in a flimsy “holiday” bag. Second, the paper contents inside were ripped and something you can buy in a package of 20 at a $1 store.
I was hoping it would be of much higher quality.

We received our first box last night and one of the containers of slime burst open during shipment, so most of the contents inside were ruined. we managed to salvage the other containers of slime and one other item. All the other toys were coated in slime, as well as the packing paper, candy and the box of cracker jacks. It was a huge mess. So I paid around $45 for 3 containers of slime and a squishy toy. The other thing is that the slime is VERY fragrant, so if you or your kids are sensitive to smells (like mine is), this might not be the best subscription for you. Cute idea though.