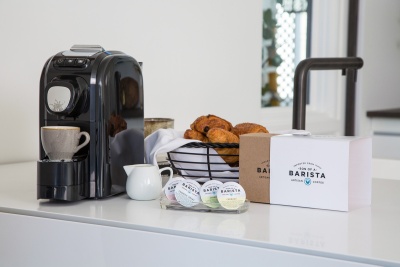 Son of a Barista
17 reviews
The best quality Espresso delivered at your door. 60 Coffee/Month PLUS A FREE ESPRESSO MAKER!
Plans as low as $33.00 / month
Buying Options

Son of a Barista reviewsReviews

Working with this company is a total nightmare for me. Thought I should give it a try since there’s a lot of good reviews but that wasn’t the case for. First order didn’t come on time. Emailed the CEO/ President and was told that my product is on the way. After a wk, emailed him again and his response was what my order number and he claimed that they didn’t get the order form cratejoy but why say I’ll received it that same wk when he doesn’t have the order to begin with?! He apologized about not getting my order and sent me xtra pods. Finally got my order but received a white machine instead of black one. Tried getting it resolved but never replied to me anymore. So I was like ok FINE!
September came and waited for my next shipment of pods and not got nothing! Emailed them several times and finally got a reply from CEO again. Asking me for my order number. After thT didnt here from them anymore. Emailed them again through cratejoy website and I got a response from someone in their company and asking what second shipment of pods I’m talking about. I’m suppose to get 180 of pods in total but it’ll be split in shipment every month which I’m sure they know because that’s the deal they have at this website. The first month should be 60 with the machine, another 60 the second month, and lastly another 69...

Not what I was hoping for

I was really looking forward to this espresso subscription. Considering the state of the world, I was excited of the prospect of having high quality espresso at home. However, it did not live up to my expectations. The espresso did not have a pleasing taste. I am not a fan of the machine. The instructions are written in broken English. They are hard to follow and figure out. I wanted to adjust the amount of water it used to brew, but could not due to the poor instructions. Also, you have to pay up front for 3 months to start the subscription. So I am now stuck with a machine and 2 more shipments of pods that I will never use.