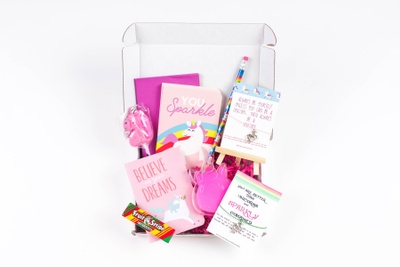 This box was filled with dollar store trinkets. I got it for my 6 year old niece for Christmas and was not impressed with the presentation or the contents. And no card included showing what should be in the box. We contacted the seller and her response we rude and not helpful.
Regret buying a 3 mon subscription

I was sent an email by the recipient's guardian asking what the 2 envelopes were for in the box and she wondered if something had been missed when assembling the box. I clearly explained to her that in the past, customers had expressed interest in gifting one of the bracelets included in the box so I started putting envelopes in so they could mail the gift. Secondly, she told me that the box "was a mess" when they received it and I asked what she meant by "it was a mess". I never received a response from her. Our boxes are put together nicely and what happens to them when sent to the post office and during shipping is out of our...

Not worth the trouble

Just problems, problems, and more problems.
I can't get responses from the seller. The second of three shipments never showed up and this had to be corrected. The third and last shipment once again never showed up and seller won't answer me for tracking numbers or any help. I am going to try to get a refund.

It is really unfortunate that the customer above is so unhappy after going above and beyond to accomodate her. Yes, the second of three shipments was not shipped on time, nor was the third. The reason she never received her products in time for the second box was a glitch in the system. As soon as she brought it to my attention, a box was shipped out immediately. The second box was shipped to her address given on the Cratejoy account only to be given a different address when I asked her to clarify her address. I then shipped ANOTHER box to the address she gave me in an email. As far as tracking numbers, Cratejoy sends a...

Not what I was expecting

Not worth the money. I received a broken reindeer candy cane, two blank envelopes, two cheap stickers, a cheap quality Christmas pen, a gingerbread man craft, a bell on a ribbon and the two wish bracelets. I could have bought more and better quality things with $15 on my own. Disappointing. I’m glad I didn’t plan on this for a gift.

Alaine: Sprinkles and Wishes is sorry about your disappointment. Our goal is to provide a number of fun and seasonal items at a terrific value. It is unfotunate that the candy cane was damaged in shipping. We are going to ship you a new box and wish you a very happy holiday season. 🎄

Hi Melanie, I’m sorry you had this experience with our box. As the listing description states, there are 2 Wish bracelets and 2 envelopes in case you would like to share one. Also as stated in the listing description, the triangle piece of wood is a small easel to display your cards. The pen is a paper mate felt tip marker which sells for $3.00 on its own. Also included in this box was either a set of 8 unicorn note cards or a unicorn pad of paper. Finally, each box includes themed stickers. This month each box got an entire sheet of unicorn stickers. I also included a unicorn lollipop in this month’s box as well. Each of the monthly boxes...