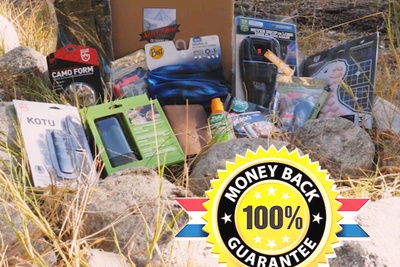 I got the Level 3: Survivor Pro 3 months subscription. "For serious survivalists and outdoorsmen that are truly ready to take their preperation to the next level. This box includes everything from the Survivor and Survivor plus levels with additional top tier gear such as heavy duty Bags, Tents, Stoves and more."
(yes preparation was spelled wrong)
I thought this would be a perfect way to check out some cool survival gear.
I didn't receive any heavy duty bags, tents or stoves. Instead, I got a box full of "tactical-inspired" gear and a whole lot of Made in China stuff. The stuff was cheap and not very useful. Reel cover? Cheap nylon hammock? Baby Swiss Army knife?
NOT very "Survivor PRO".
Save your money. I did appreciate the fast customer service in canceling my subscription and getting refunded (though they did charge me a month sooner than they should have).

Do not waste your money

This is the worst box ever at least at the lower levels. I expected something cool and our first box took OVER a month to come in and had a small flashlight, a lantern, a fiction book, and a hat clip... looked like someone looted a few things from a dollar general. I bought as a package deal so I'm really hoping something good comes in the next two boxes.

I feel that I didn't really get my money's worth. The first month was ok but the next 2 were just not worth it. In one I did get a pocket knife but the blade was cheap. Wouldn't hold an edge and it bent cutting a plastic strap. I also did get a bow sight for the bow I don't have........ just over all a bad experience.

This company is trash

My box showed up very late, and had inconsistencies with what was on the card (got a cheap whistle instead of the water purifier pump). They also charged my subscription twice in 2.5 weeks (made me miss a car payment). I've sent several emails trying to get a hold of them to fix it, but no one has responded. Definitely not worth the time and money. I hope their warehouse burns to the ground and the company goes under so one else has to deal with them.

Not worth it (money or aggravation

I ordered in June for Father’s Day and never received box until July 22 and I had to email them to get any I go or tracking also in the mean time of waiting for 1st box they billed and took payment for 2nd box for August? So being disappointed Nothing in that box was worth the money I spent, I canceled after that, I was told I will still get the August box I already paid for but here we are August 10th and no email with tracking and no box.....