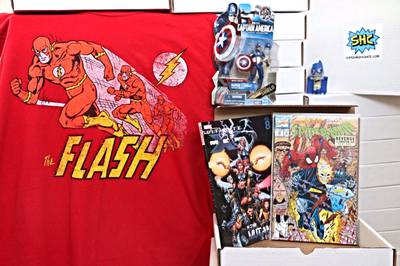 I really wanted this to be worthwhile. It seemed like an inexpensive way for me to geek out on some super hero stuff without investing a lot of time or money. Unfortunately the person running this service either has a lack of time and resources or a complete disregard for customer service and satisfaction. He comes across as someone that thinks he is doing you a favor by giving you what you paid for. He does not respond to emails unless you complain to cratejoy directly. His shipments after your first box go out about every 5 or 6 weeks if you are lucky. Otherwise the goods are decent, and you do get your moneys worth. I received my 2nd shipment 7 weeks after my first and my 3rd and final shipment 6 weeks after that.
1st box contained a batmanga shirt, superman socks, and 2 hawkman comics. 2nd box contained a joker tshirt, justice league socks, a nightwing and a spiderman comic. 3rd box was upgraded after I complained about the lack of communication and time between orders. I received guardians of the galaxy tshirt and shorts set, a green lantern graphic novel, and a flash button in that one. Worth mentioning that the seller said he was sending it out next day after apologizing for losing my initial email in his spam folder. He sent it a week later after I complained again saying that he got my zip code wrong and it was sent back to him...

Not worth the money.

Not worth the money

For the amount of items I received I don’t feel it’s worth the price I paid. I did receive a book and shirt which is great but the other two items(a pair of socks and I small pin) I feel we’re just thrown in with no thought behind it. Also, it says “they look to ship every Friday”. My items were shipped late, after I was told it would be shipped by the end of the week. I also had to message the seller twice it get information on when the box would ship. Between the late shipping, and the lack lustre items, im not impressed. I have unsubscribed and will not recommend this box.