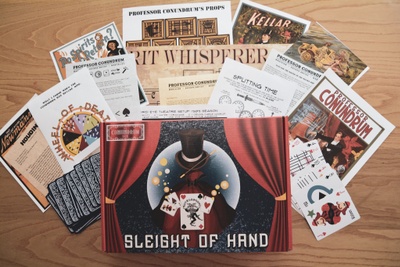 Purchased this as a gift in February 2021. This sounded like a great way to pass the long boring winter days.
The first puzzle arrived on time. The puzzle was confusing at first, but in the end was a fun challenge.
Waited 2 months for the next puzzle and it has never arrived. There is zero response from the seller. I do not recommend this puzzle.

Hello Shane, Please check your spam folder and white list our email address (sorry, Cratejoy won't let me post it in this response, but you can find it on our website). We replied to your March 27th email within two hours. The second box was sent on April 3rd, when it was scheduled to send. When purchasing from Cratejoy Marketplace, we send the first box ASAP, even though it is the next month's shipment. In this case, your February 9th package was your March box. Cratejoy then schedules your second box at its normal time, in this case, April. We send all boxes beyond the first box during the first week of the month. This policy is communicated on our...

I'm giving this product a low review due to the poor billing practices of being charged one month in advance of the item shipping. However, my first month the charge occurred and the box arrived shortly thereafter. So I had incorrectly assumed that is how future billings/shippings would operate...obviously my bad, I suppose.
I was charged on 1/7 and had my first shipment arrive 1/16
I was charged again on 2/7 ... the shipment arrived on 3/13
Then I was charged on 3/7 .... the shipment was sent on 4/9
Unfortunately I was not paying enough attention and when I saw the charge from 3/7 I had again incorrectly assumed it was for the box that arrived just a few days later, and NOT for a box that would be shipped a month later! So when I canceled the service in early April, and then about a week later received notice that my box was shipping, that is when I realized what was happening. The billing / shipping timeline for the Feb and Mar boxes doesn't make sense to me based upon my initial experience in Jan.
Somewhat deceptive billing practices. Due to this I do not recommend and would not subscribe again.

Hi Jamie, thank you for your review. We follow Cratejoy's required billing practices. When you first place an order, it is for the next month's box - however, Cratejoy requires us to send a box ASAP. We then send the box. Renewals happen on the 9th or 10th of the month for the next month's box. This gives us about three weeks to know the number of boxes to produce and to produce those boxes. Every Cratejoy subscription we personally subscribe to works in the same manner, so I believe this is standard for all subscription boxes. We need enough time after an order to create the boxes. We ship out the first week of the month, which is stated on...