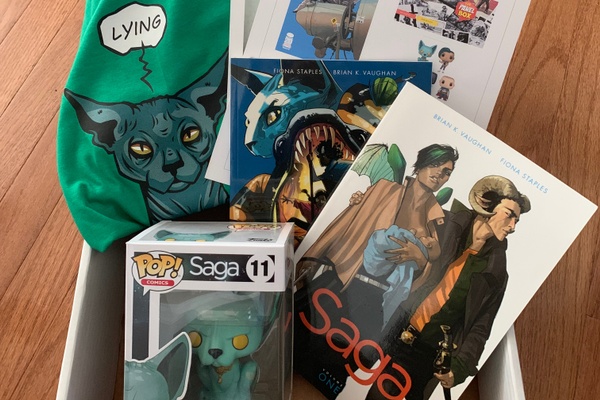 A monthly subscription box featuring creator-owned comics, frame-worthy prints, tees, and merch - as well as some of the best indie comic titles. Our goal is to expand our subscribers’ comic exposure beyond Marvel and DC comics. More importantly, we want to provide a sales channel for independent comics. Help us support artists and creators!

Q: Is it a different theme every month? Asked by Sebastian L., July 2020

After subscribing to this box, I got one box then nothing for 3 months in spite of being charged. I was told I would receive 2 free boxes for that, but was charged anyway. Aside from that, the product is not at all as advertised. What you see in the picture is a lie. For my first box I got a low quality t-shirt and 4 comics, for the second I got 2 comic sets and nothing else. The comics are really underwhelming too. Not worth it.

Not a reliable monthly subscription.

This box was initially ordered as a Christmas gift, and since it is a small company I was okay with being patient for shipping and the friend I purchased for was excited about the box regardless of how long they’d have to wait to get their first box. The first box came late January, which was fine. By the end of March, my friend had not received their February Box. There were some shipping issues that I’m sure had nothing to do with this company since they did send a shipping notice. In April however, no March box and no shipping email for either March or April. I had contacted the owner (who I believe to be the same person who left the first Crate Joy review and the reason that I trusted the box to be reliable. The names are the same, check their website lol) and was told that they had fallen behind on boxes and would ship out March ASAP and that subscribers would receive two boxes in the month of April. It’s June now and no second box. I feel bad for my friend because I purchased a six month sub and they have only received 3 out of 6 boxes. It’s a little embarrassing on my part because I hyped my friend up for this sub and in the end it didn’t really work out. I don’t know if I should resort to fighting the charge on my CC or try to figure out what’s...

Thank you for your feedback. We fully admit to sucking over the last several months and have taken steps to get our cadence back to normal while we are still in the process of getting some subscriptions caught up. We additionally realize how our poor service reflects on the giver when the subscription is gifted to another and there are delays in shipments. This is unacceptable and not at all indicative of what we are trying to do. We appreciate the feedback and will do better. Deepest apologies - the Panel Box Team

Received all my comics bagged and boarded (which is a really nice touch) and got 2 #1's (Outcast and Trees) that I read and put back. Its great to get non-Marvel/DC stuff for once. The Legend comic was excellent. Packaging was nice, and included a newsletter. T-shirt is really cool though a little snug. It is the right size though. Wall-cling is awesome. I'm a fan.

We expect to ship on the 15th of every month!