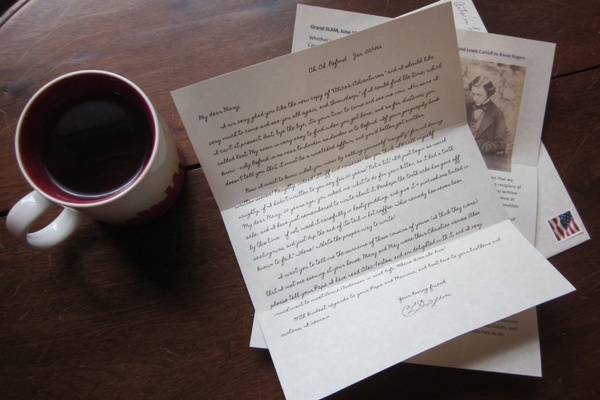 Learn more about the lives of history's great creators by reading their own words! Every week Arts in Letters sends you a real letter written by a historical figure from the fields of Science, Literature, Art, or Music along with biographical and historical info. Choose your plan to begin your journey through history!

Past boxes from Arts in Letters Historical Letters - Grand SLAM!…

SLAM Music Ludwig van Beethoven to his brothers in 1802

Readers learned about one of the most important times in Beethoven's life in this week's letter and the accompanying background profile. Pictured is the first page of the included Background and Bio that is a regular feature of the Arts in Letters weekly packets, all the info we can fit into a letter envelope!

Ever heard of Schrodinger's cat? It was a thought experiment devised by Austrian physicist Schrodinger, a friend and colleague of Albert Einstein. This week's Science packet included letters from both of these great thinkers to each other. For every letter we look up the people, events, and topics mentioned to give you an insider's understanding of the letter. Shown below are the Letter References for this week's mailing, along with an illustration of the cat problem.

What could American writer Ezra Pound have in common with 'Lawrence of Arabia,' T. E. Lawrence? In this week's featured letter Pound responds to Lawrence's request for advice in his own uniquely expressive way.

Much is made of writer Virginia Woolf’s struggles with mental illness, so we thought we’d choose a letter from a time when life seemed to be pretty good for her. This letter is to her brother-in-law Clive, the husband of her older sister Vanessa Bell [1879-1961,] referred to as ‘Nessa’ in the letter.

It’s interesting that the relationship between Cézanne and Bernard seems to be that of master and pupil, or at least mentor and student, since at the time the letters were written Bernard’s style was fully developed and he had already produced the works he would be best known for while Cézanne’s style was still evolving.

This letter packet features a letter written by Clara Wieck Schumann to friend and fellow musician, composer Johannes Brahms. Get a peek into their relationship and into the Classical music scene in Europe during the Romantic Era.

Money, money, money, even great artists can have concerns about money. It should be no surprise that the most successful artists are often the best businessmen, receiving high fees as much for their negotiation skills as for their artistic talents. This week’s letter gives us some insights into the business side of art in the Renaissance era, specifically Michelangelo’s dealings with the Medici Popes.

One of Tchaikovsky’s most important relationships was with a person that he would never meet. Beginning in 1876, he was in regular written contact with a woman who would become his patroness and one of his closest confidantes. This letter package features a letter from the composer to his patroness, along with background information on each person and their lives, and totals 3 double-sided pages.

This week’s letter is from an idealistic and rebellious young man seeking to make connection with one of his personal idols. Their subsequent relationship would have a great impact on both of their lives.

This week's subject is Art! Featured is a letter from legendary illustrator J. C. Leyendecker responding to a request for career advice. Leyendecker created many iconic images of Santa Claus and the Baby New Year for magazines such as the Saturday Evening Post.

Arts in Letters appears in these collections...

Gifts That Ship in Time for Christmas

by Arts in Letters
649 sales
★★★★★11
Take a weekly trip through history with Arts in Letters, the historical letter subscription where smart, curious people learn about creative people from history who made incredible stuff!
Delivery Method
Printed letter packets delivered by First Class mail

Order by December 15th and get it by Christmas

Letters go out every Saturday.
Renews monthly on the 1st
- Subscribe by midnight Wednesday EST and your first weekly letter packet will be sent Saturday. - Want your subscription to start later? Just let us know....

Questions for Arts in Letters?