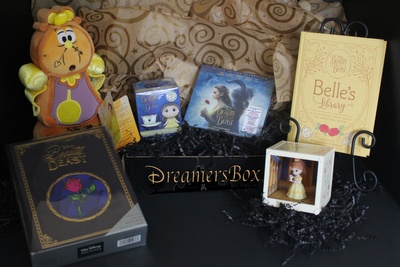 Is the Ultimate subscription box to fill your life with more of what you love. Everything Disney!

Just got my box today ordered the ultimate box for $100+ I sent them a suggested ideas list since it was for my sons birthdays. Not only was it not geared toward boys. It the purse was from the character warehouse and so was the count down calendar. It was a complete rip off for the 4 items that I got. They said the purse was $59.99 they lied. It’s even on sale on hot topic for $35. Seriously house stupid dot hey think people are.
Then on top of that it took almost a month to get. I received an email with tracking information but the box didn’t even ship for another 3 days.
Moral of the story save your money. Far better companies out there with far better boxes.

Waste of my money

I placed my order for the mug and coffee box on Feb 18, 2019. Almost immediately I realized I did not want to be delivered coffee every month, I just wanted a cool, Disney coffee mug. So I cancelled and decided to make my decision after I got my first box. (The email said it would be Lilo and Stitch, which I dont like. Oh well)
Around April 5th I contacted the seller to ask if my box was ever going to be sent ($58!!!) And could I please substitute for the April box (Alice in wonderland). I got a response almost immediately saying they would look into it.
On April 12th I emailed again asking them to please respond or I was disputing the charge with my bank and with cratejoy. April 14th I get a tracking number for my package.
On April 24th I got an email asking for a review of the package I still have not gotten and, when I checked the tracking information, had not actually been shipped out. I contacted the seller AGAIN and got an email with some story about how the post office is at blame and they are sending me out another package since the post office lost my package.
On May 6th I finally get my package. A bag of coffee, a quite heavy figurine of the Cheshire cat, and the ugliest, most awkward, generic Disney coffee mug I have ever seen in my life still with the pricetag still on.
I am extremely disappointed....

DO NOT ORDER THIS!!!! I never received items despite being billed for 2 months and have had NO RESPONSE to any emails regarding this issue

Boxes were shipped and she said she did not get them. We emailed her tracking for her order.

Doesn’t worth the money

I am paying $80 for the second size box (tax+shipping)
On my first shipment I got only 3 products which when you sum up the tag prices it is about $70. I could’ve got those things easly from web for less than that. If I could’ve cancel my second month box, I would’ve already done that.
I was extremely excited to receive the first box but I am very disappointed. I do not suggest anyone to subscribe to this box unfortunately.