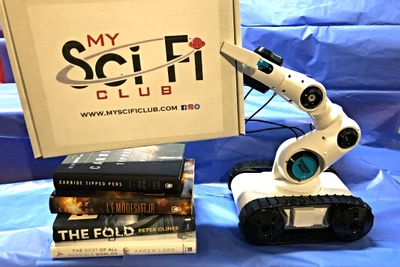 by My Sci Fi Club
Your new favorite sci-fi and fantasy monthly book club! We ship in less than 48 hours, no waiting!
★★★★☆45 reviews
Plans as low as

I purchased a 3 month gift subscription for my husband and only received 2 of the boxes. I reached out to the company when it had been over a month and never heard about my first box - never got a response. finally the first box came, and then the second - both of which were great - but that was it and it says my subscription has been completed. i once again reached out to the company with no response. Cratejoy was amazing and helpful and ended up refunding me because the company never got back to them either LOL. terrible! spend your money elsewhere!

Great idea with terrible execution. I received my first box in a few days that included 2 books but no digital download code or link. They missed the next month and then sent me a September box. Again the promised digital download was absent. I was charged for another 3 shipments a couple weeks later even though I only received 2. My October box never arrived and I suspect it may never. I am now 5 months in and I've only received 2 boxes. They do not respond to messages so good luck if you have issues. I had to file a support request with Crate Joy to find out what is going on. We'll see how it goes but I recommend against supporting this seller.

They use cast offs.

They send out the exact same books as Bookcase.club...weeks after Bookcase.club. There is zero imagination, and zero curation. Not worth it. As for the movie? It's got a clearance sticker from a dollar store on it. Do not go with this one. It's so very not worth it.

I'd give it half a star if I could

Ordered it the 6th, my first box it said it would shop within 7 days. It's now the 25th. I've sent three emails just to get a tracking number. Nothing. I'll loose the 15$. This is trash and not worth the hassle.

Did not receive my order

My box never showed up .

All right, I'm cancelling. This is silly. Neither of the books were correct this time. I think they just throw whatever they can find into a box. Also, I've noticed the price has been raised without my notification. No thank you.