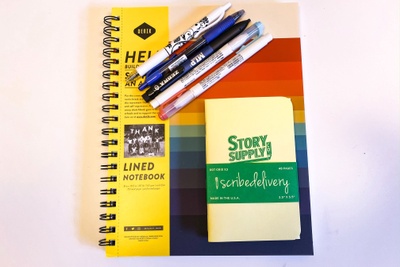 by scribedelivery
Notebooks, Pens, and Stationery Delivered Monthly!
★★★★145 reviews
Plans as low as

Edit: the biggest problem is that this box is so inconsistent. The past few months have been sort of ok, but this month I’m just done for good. For my $29 plus shipping, I got a $9 (price on back) journal (low quality paper that’s not smooth or pleasurable to write on), 5 pens, and 3 notecards on basic matte card stock with a quote printed on them. No way are these pens worth $5/ each- they’re nice, but not $5 each nice! There’s definitely value in curation and packaging, which is why I don’t mind the other stationery box I get, where maybe the items are barely equal in cost to what I’m paying, but everything is wrapped beautifully in paper, I get artist drawn postcards in an envelope addressed to me, and it comes in a nice box packaged orderly. I just look at the pictures in this listing of past boxes and this month just feels like a total rip-off... if the journal had been a Franklin Mills stone ground paper journal or something luxurious like that I wouldn’t be writing this right now, but this is just insulting.
I’ve reviewed this box several times, previously being very disappointed in the citations... this month was great!!!! Chad & team definitely did some work on this month’s box! The pen in the box is so cool, & hard to describe: its in 2 pieces, a ‘shell’ I’d call it, & the ink ‘refill’ which goes into...

I got one table and three pens for thirty dollars. Thinking that’s a bit much I can go to office max and get more for my money.

The amount of products I received isn't even worth the price of the box. I am so disappointed. I could have done a better job shopping at Daiso with better pens and notebooks. I'm not gonna renew this. Do a better job next time

This was my very first box from you and I wasn't really impressed...there could have been a little more for what I paid.

I subscribed to two months of deliveries. I allowed the second after not being very excited about the first. I just received the second delivery and am still left wanting. My first delivery included three Japanese journals that I donated to my daughter's teacher because they were like the three lined paper I learned how to write cursive on when I was in elementary school. The second month (and I understand the Earth Day theme), but after receiving the email that Chad was so excited about the box because they'd pushed it off for months, I was really expecting an awesome box. Basic pens and small notepads. I would not value what I received at $30. So I've unsubscribed. I may give SCRIBEdelivery a second chance later because there are so few boxes designed for writers, but for now, I'll be keeping my money.

Not enough for the money

I received a FIVE pencils, an eraser, pencil sharpener, pen, jumbo post-it note pad and a notebook. Sounds like a lot but not worth the money. And why do I need 5 pencils. The best one was the mechanical pencil, but overall I’m not a pencil person. I canceled upon receipt if the box. I didn’t want to waste another $30. I have seen a few good boxes previewed on their Instagram, but not worth the risk to hope you get one of those.

Dont get me wrong... there are somethings I liked.
The larger Write Notebook was nice... HOWEVER.... sure I am excited to get Scribedelivery but I do not need such a large logo on a notebook... could have been smaller so it wasn't so distracting... putting logos on things is nice... but does cheapen the end product (especially the size of the logo... its half the width of the product!)
It for sure didn't even come equal to the $29 price tag. My own number crunching puts it at around $25 respectively.
I will see how the next month goes... but right now I am a bit disappointed with my first box (envelope).

Too plain, not fun

Function can still have a cool cover.

I don't mind what I received but for $30, it does not seem worth it! One notebook and 4 so-so pens does not seem like enough. I will give it one more month but if it doesn't improve, I will be cancelling

Just got my first box, and I’m not impressed at all. I received a damaged notepad, three stick pens, and two cheap cards... absolutely cannot comprehend how this is valued at $30.
I might give this subscription service one more month, cause I really want it to work out.

I just realized I am paying $29 a month (mistake on my part I thought $10) last month I received 2 pens and 3 notebooks (2 of which were extremely skinny) will give another month a try, but not worth the price in my opinion :(