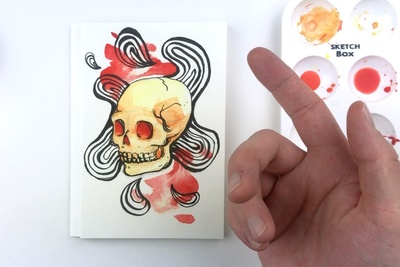 by SketchBox
Every month we send unique art supplies to your door!
★★★★☆20 reviews
Plans as low as

I somehow had two boxes for the same month ordered, so before they arrived I emailed to ask them to only send one, I had no use for two. They sent both, charged me for two and made me send the unopened extra box back. They were very rude to me and not only did I have to pay to send it back, they tried to charge me an extra restocking fee.

Customer was fully refunded for the erroneously ordered box as requested. We requested the unopened box be sent back so we could have it for another artist. Customer was never charged a restocking fee.

All it was is a lot of paper stuffing and some different sepia pens with some subpar black pens. Nothing to actually make anytbimg with. A well of liquid ink too and a brush... if i could give it less stars i would.

Jon was very rude when I asked if I could use a coupon code. He assumed I was trying to pull a fast one. I will never do business with these people and I will definitely recommend no one else does either.

So sorry if you mistook my humor for being rude. We keep a close eye on our coupon codes and have never offered a free box promotion.

I was highly disappointed in this company. Our first box was received late through the fault of the carrier this company uses. We were not happy with the contents (only 3 items and very overpriced) so wanted to cancel. Because we received it late, we could not cancel by the first of the month cutoff date so we are being charged for a second box. Company has been unsupportive and inflexible. Would not recommend.