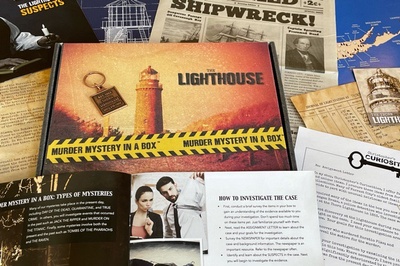 Murder Mystery in a Box

by Murder Mystery in a Box
Solve a murder mystery using the items inside a mysterious package delivered to your door.
54 reviews
Plans as low as

Murder Mystery in a Box reviewsReviews

I can just echo EVERYTHING said in the fellow one-star reviews. I had a long, well-thought-out essay written on ALL of my issues with this company about 6 months or so ago, but looks like the company reset its reviews again!
Customer service is terrible. They are rude, unprofessional and patronizing.
I’m only here because my friend just asked me if I had heard of the company because she was interested in subscribing... YEP I had! Glad to see they’re still up to their old antics.
Now to countdown the time until they respond rudely, perhaps accuse me of being racist as they did to another reviewer, or make up another lie. Good luck continuing to silence people and cause fear of the smallest dissent in your Facebook group.
There are MANY other options. Don’t waste your time or money.

I got this box and completed the mystery. It had a lot of potential, but some of the puzzle solutions were VERY illogical and unsatisfying. I voiced my concerns on a Facebook post of theirs, and the comment was promptly deleted and I was in fact blocked from commenting on the page ever again.
Their defense was that they asked "what did you ENJOY about the box?" and my comment was constructive criticism rather than sheer praise, and so I "didn't answer the question," which violated their (non-existent) guidelines. I think that's pretty absurd, but you can decide for yourself.
I also find their billing practices shady - their boxes ship out on the 21st, and you probably won't get them till the 27th or 28th. They charge for the next month on the 30th, so in all likelihood you'll be charged for the next month before you can even finish the first. Perhaps their business model is people like me, whom they can squeeze two boxes out of before they have a chance to react.
Your experience may vary. If the box was great, I would have let the weird customer service slide, and vice versa. Unfortunately not the case on either end.

I have been a member since February 2017, I posted my opinion on one of the mysteries on the site and they banned me. Seriously, they removed me from the site. I apologized for my "opinion" and told them I would not speak anything negative again, they will not respond and not let me back on. I have reached out to them at least a dozen times. If you are not on the discussion board, you are at a series disadvantage.
There is ZERO customer relationship. Before I was removed from site I had emailed customer "service" (for lack of a better word) and they argued with me via email. It's not that great, the mysteries have gone down hill over the past year.
Oh, I spent $100. for a premium experience as well, I agree with Donna, last post, there was a missing (crucial) piece to the puzzle missing. SAVE YOUR MONEY! If you really want one, buy it on eBay.

We do not permit folks to post abusive, racist or discriminatory comments on our websites or forums. We do not apologize for this policy. At The Mystery Experiences Company, we believe in providing a positive environment for people to enjoy solving our mysteries.

Was fun, too many typos, canceled

These used to be fun for me and my husband and we’ve been doing them since summer 2016. We noticed typos in almost every box, some that made it difficult to solve the mystery (dates wrong, ciphers with typos, etc). We didn’t like when they switched to a Facebook group instead of the Forrest city website, but got used to it eventually. It has been a few months since we’ve done a mystery and tried a box tonight. Went to find the group, and neither of us could find it. It seems we were banned or blocked as the company said it was still there. I guess they didn’t like a comment we made about the lighthouse mystery and blocked us. The puzzles were sometimes too difficult and other times fairly easy. There was a variety of puzzles but it’s just not worth it anymore.

We do occasionally have to ban a customer from our discussion group if they make inappropriate comments. We don’t enjoy doing so, but it is sometimes necessary. With regard to our puzzles and contents, there have never been any “typos.” We find that occasionally when a member is unable to complete a mystery or solve a puzzle, they conclude that it must have contained an error. This is not correct. Everything included in our mysteries is intentional and is part of the mystery experience. We suggest that members contact us directly if they have difficulty with a puzzle or a mystery. We are always happy to help!

So disappointed in this company. Have been receiving boxes since the very beginning. They have always been full of errors and typos but I recently paid $150 for a premium box and it was missing a crucial piece that made the mystery unsolvable. How can you pick as suspect as the killer if there is NO INFORMATION on that character? (Some other people's boxes included the bio card--mine did not.) After several emails to the company, I received a reply saying the boxes were shipped complete and I should sleuth harder. I feel like a sucker. Don't waste your money.

The mystery at issue was complete. There were no items missing. Our mysteries often take you online to find additional clues, and the clue referenced could be found with a bit of sleuthing. Some of our mysteries can be challenging to solve, but we are always happy to offer help and hints when needed!

I've been a member for some time, but finally canceled my subscription.
There are often errors in the puzzles, and/or you're expected to make certain assumptions that aren't necessarily reasonable. If you have the audacity to comment about that publicly on their Facebook, they will delete it and ban you; if you have the audacity to privately email them, they will argue with you and block you. Early in my membership, I learned this firsthand, and had to literally beg to be allowed to continue being a costumer.
After countless more errors, and watching the company bully anyone who dares to speak ill of them, I'm done. As beautiful as their stories were, their puzzles were flawed and their idea of customer service is a joke.

I moved. I told them I moved. They kept charging my card but didn't send to the new address. I told them about this and they said I had to log in to cancel my membership. Sketchy, but fair enough.
I can see why they are continuing to charge the card, but they also aren't sending me any product, either.
Hire some people.

We give our subscribers complete control over their subscriptions. We ship to the address exactly as it is provided by customer, and it can be changed at any time by the subscriber by just logging in to their user account. It can be updated as many times as needed at any time!

I played for 3 months and found each box had tons of errors. I found typos and some of the puzzles were not accurate. The stories were not engaging and lacked a lot of originality.
I have no idea where all these positive reviews are coming from.
If you say anything remotely negative about this company they black list you. Not to be trusted!
The quality of the materials was good. I did like that. I just couldn't get past all the errors.
Save your money!