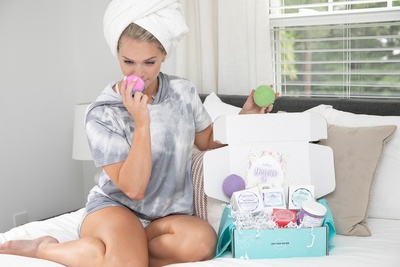 by Bath Bevy
★★★★★158
A subscription box full of carefully curated bath and body goodies delivered monthly.
Plans as low as

I was really disappointed by this box. It was my first and I immediately cancelled my subscription. Everything was over the top candy smelling. Very cheap. Very teeny-bopper. They need to up the sophistication at least a bit.

Okay, not perfect, not horrible.

I've gotten two boxes. The first was okay, but I felt the value wasn't as good, but sometimes, that happens.
The second box, I was glitter bombed everywhere, including my wazoo. In the "Mermaid" box, the candle had glitter - unbeknowest to me. I opened it to smell it and bam - glitter flying. The "giant" bath bombs were too much. Almost nothing in the box had a scent, but worse, using one of the giant bombs left my skin bitter. It wasn't soft and my husband kissed me on my shoulder and nearly gagged. Not a reaction you want after getting out of a bath. Unfortunately, pretty much all giant bath bombs have a similar problem due to the amount of citric acid used. In fact, everything in the box had next to no scent. It was quite odd.
And of course, the giant bomb had a ton of glitter. Getting glitter in my lady parts? Not something I'm interested in.
I'm not sure if the box is geared towards a much younger crowd (I'm 34), but the incessant glitter everywhere made me think of an older teen or very young adult going to the club, and dousing herself in glitter to shine in the lights.
I get using a very light amount here or there, but maybe I'm far too old for the target audience for the box.