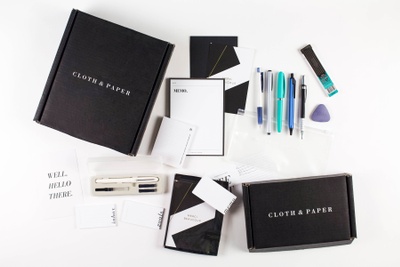 i used to love this subscription service and lately have been disappointed with the penspiration box. I unsubscribed because I kept getting really cheap pens that I could buy for like a dollar from China and the company started adding markers and high lighters when I’m paying for a pen box. I’m disappointed in the box the quality has definitely gone down

Lack of curation quality in 2020 boxes

I subscribed for three months. The December 2019 box was terrific. It had several unique pens and one marker with a fine point that I could use like a pen. And it included a nice two-toned eraser tape. The packaging in the clear envelope was great for storage (so I can see what pens are inside).

The February 2020 box was very disappointing. There were two markers more appropriate for crafting/artistry than writing in a planner or on letter paper. There was a completely average uniball pen that my office stocks at work. And there was a cheap feeling black pen. And there was an erasable pen, that was interesting, but it was bright green ink, so I'm not sure where or how I'd use it. Finally, the box had no plastic envelope for storage, just a disposable opaque bag.

I received my first stationary and penspiration box today. After reading the reviews and seeing what the January and February box had to order I decided to take the plunge and sign up. I even bought the cloud gray A5 planner in anticipation of possibly some great things to use with it. The pens that came as part of the Penspiration box were fantastic, no complaints, and I’ll likely continue but the Stationary box was disappointing. The planner inserts were nice but there weren’t that many included, it really was like a sampling. I didn’t care for any of the other items in the box. There was some sort of weird looking acrylic tray/holder in the box but no description on what it was. I might give it a try for one more month but the next box is really going to have to be stellar to convince me to stay subscribed for almost $50 a month.

It would have nice if I got a variety of other items.