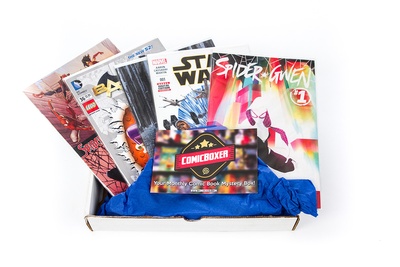 Great comics for our grandsons.

I bought this as a surprise gift for my two grandsons who are 13 and 11 years old. They were thrilled with the gift. Who doesn't love mail, and a mystery box and comics, parents not such much as several of the comics were labelled AM (for adult material) and were deemed unsuitable for the boys. Too bad. I hope this can be rectified in future mailouts. Otherwise a great gift idea.

I really like this box. Always a nice mix of stuff. Would be nice to throw in a some TP's or something once in a while but I've only done it for a couple of months so who knows? Maybe they will at some point. Nevertheless, a solid box.

I think this service is really cool and a good way to expand your comic universe. Was a little bummed that I did not get any signed comics this box. All of the review videos I watched before subbing had one, but I am sure that will change in the future. Highly Recommend!

Big disappointment (they got it fixed)

ordered a package in july 8 now its september 3 didn't get it yet and customer service is ignoring me for some reason (i want my money back)
update: they reached out to me and fixed it