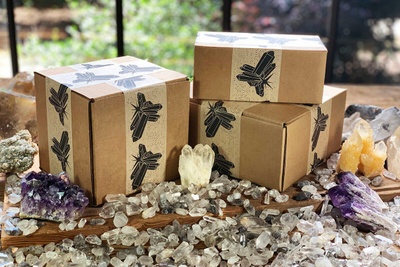 I was excited initially to subscribe to and receive monthly crystals from here. The first month I thought was fairly nice, but the months following were nothing I wanted. I don't know a ton about crystals but I know most of what I received I did not want to keep around for display or use. They throw in some "additional bonus" items that felt like some crumbs from the bottom of the rock barrel. I would actually give more like 2 stars but felt that part of my disappointment could be my lack of knowledge of crystals and maybe they were better to someone with more knowledge.

Crystals are my thing. I love them, but certain ones, I'm not thrilled about. Although it's no surprise to receive, I admit that I was a bit disappointed. The first crystal I received was an amethyst geode - fitting for the month of February. I'm not jazzed about receiving another geode - another amethyst geode - from anywhere. That seems like the easy, go to cop out. It's pretty and solid, but not my cup of tea. I did figure I'd give this box another go with another month, but I sincerely hope it's not another geode. Or an amethyst.

The crystals I received were great. They had a good energy on them, and were some really pretty pieces. However, I felt like they were not large enough or rare enough specimens to justify the cost per month. I'd highly recommend this subscription to anyone who otherwise doesn't have access to crystals. However, for me, it just wasn't worth the cost.

Unimpressed with this box. Most of the gems look cheap. This was my first box and it was definately disappointing. 😔

I love my crystals but was very disappointed the items are so, so small. I would accept less quantify for larger piece(s). I look forward to the next shipment.

Can’t wait for the next box!

Satisfied for the most part

I got this box for about 6 months and loved the variety of crystals but I received the same crystal several months in a row. I feel like if I’m paying almost $60 a month I shouldn’t be getting duplicates.

I received the Hand-made Cloth Grid all messed up and in bad shape . Packaging for it needs to be improved
Also if more instruction was provided on how to use the crystals and grid , it would have been great

On the small side

The crystals were very well packed and labeled, so that was nice. I was very excited to received this but a bit disappointed as all the crystals were on the small side so I'm not sure if it is worth the money, however, I've only received one shipment so far. I'll give it one more month.