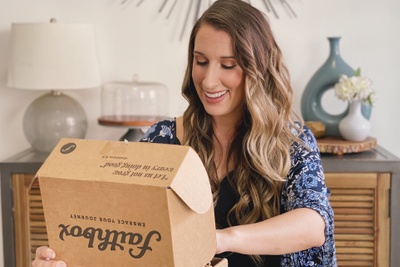 Super bummed, did not get anything worth what I paid, and I was so excited to try it out. Cancelled after my first month.

Where to start. For one thing, the web site is horrible. You would think it was built in 2001. They don't even offer a gift receipt. How do you not offer a gift receipt? I just had to print the poorly designed receipt and line through the price to give my wife. Customer service is a joke. We moved and I changed the shipping address 2 weeks before they were supposed to ship the package. And of course they shipped it to the old address. Not that my wife really cared. She was less than thrilled with the contents. It just had a few Tim Tebow paraphernalia items in it. Nothing motivational or spiritual. She was very disappointed. I guess the proceeds go to a good cause, but our money would have been better spent sending it directly to a charity.

Greta Idea but being a member of many other subscription boxes their shipping and communication is horrible. Like others have said absolutely no communication. My first shipment was communicated thru only one email mentioning it was on the way and expect tracking up to 72 hours later. (It didn't show up til 5 days later) My second box still isn't here and I got the same shipment email over 8 days ago expecting tracking in up to 72 hours later. 8 DAYS! Later nothing.
Customer service email response was because of holidays shipment is delayed but it is January! Last month I could understand that but not in January when it supposed to be shipped between the 20-27 of the month.
Anyways I would be a member only if they can fix this issue, but as of now my 3 month subscription is all they will get from me.

Not quite what I expected

Not quite what I expected! I have to be completely honest. The only thing that I was super excited about was the book for the price of the box that I paid for. The other little things for minor trinkets that were pretty useless to me for the most part. A person that broke within 10 seconds of using it and these little passport type diary things to use while you travel? I don't travel I can't travel I have horrible social anxiety that doesn't allow me to do a lot of traveling so that was kind of not applicable to me. I was expecting I don't know more or something better. I am really excited to read the book but a bubble else everything else was just honestly things I could have gotten for free or supercheap in bulk and kind of disappointing to be honest.

The advertisement and what is actually in the box is not the same. Completely disappointed!

Thanks for reaching out Krysti. All photos on our feeds are not of the current box, they are a display of most recent and past boxes to show the variety of themes we've offered, the types of products that are different in each box, the variety of books and what to expect when you receive a faithbox. We never reveal what will be in our upcoming box theme. Numerous member surveys reveal our members like the element of surprise of the monthly theme and the message we receive most often, " God knew just what I needed this month..."! Unfortunately, maybe this theme did not resonate with you and we understand that. We hope that you have gone outside the box and have joined...

I ordered a gift box (I checked that it was a gift) on the 5th of December thinking that it would arrive by Christmas. I was so wrong and after several attempts to contact someone in customer service, I was told that all boxes ordered one month are not mailed till the next month. I did not see that anywhere on the site or I would not have ordered. My gift finally arrived on the 15th of January.