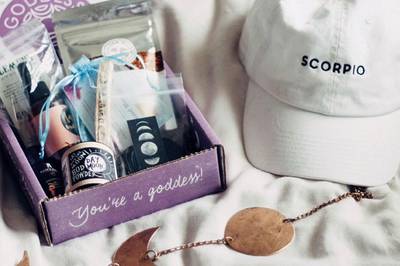 I really really like this box, this is the April Crystal box. The shipping was a struggle but that’s to be expected in these times, and the team were very good about responding when I asked about the box’s location. The book about crystals is really cool, the candle smells and looks amazing, the crystal pen and labradorite that was included were beautiful. I’ve gotten a couple of boxes from them and they’ve always been absolutely amazing so I definitely recommend them

Did Not Disappoint - Again! Amazing!!

This month's box was amazing! I love all books by I Magic, so this one didnt disappoint. The incense was thin but it didnt crumble or break and burnt really well and smelled great. The best part was the etched selenite wand. I love it!! Use it all the time now. Overall great box and great quality items.

Got the March Lucid Dreaming box as a one time purchase to see how I would like this and fell in love immediately with Goddess Provisions🥰✨💕!! Such beautiful and wholesome products! Helping anyone tap into their inner goddess and remember the importance of self care! I am eying the April box and considering subscribing for the multiple month package. À true spark of magic in a box 💕✨🌿🌕🔮🥰

I’ve received 2 boxes so far and have really enjoyed them. I love all the new products I’m learning about and have been impressed with the packaging and shipping. This months skin care products are awesome and the serum smells amazing. Last month was all about the moon and I love the moon. Excited to see what I get next!

The items that came were good, but was expecting more.

I love the idea behind it. I found the items to be quite cheap for the price of the box. I expected better quality. I received the October box and thought after looking at past boxes that it would be pretty good stuff, maybe it wasn't a good month to join. I loved the crystal that came with it but I was expecting better stuff than a fake tattoo. Maybe I'll try again in the future but I was pretty sad about October's box.

I like this box a lot. Some very unique items that i wouldnt Spend the money on for myself, but love all the items!!! The only reason I did not give all 5 stars for each category was because i wish the box was a little bigger, and also because there were several issues in receiving my first box (which was a birthday gift) and i received It a month later.

An absolutely lovely box! All of the products were very cute and nice quality. Also very fast shipping. The only reason I am taking a star down is because an item which is missing from the list of things meant to be in to box. Super bummed, but still very cute

Have enjoyed getting my first Goddess box

2020 Update: The curation of this box and value have gotten much better, so I wanted to update my review. I hope they continue on this path and providing thoughtful boxes with a theme. The packing could still use a little TLC. I still receive boxes with spilled liquid contents. A little water-proof tape or ziploc baggies would go a long way to not ruin the rest of the box's contents.

2019 Review: I've subscribed since 2017. The boxes are either hit or miss, but most commonly a miss. I can honestly say I've received 3 in two years that I really felt were worth $33. I should have just received the August box. Instead, I received the same low-quality box I received in May, but this time was worse since the oil hadn't been packed in a closed plastic bag, so it leaked all over the box and its contents. I had to email multiple times to get a response, which stated they ran out of the August box, so decided to send out old boxes. I can't fathom how that was a good idea... They also don't want to return my $ for the month. They want to give me another box. As I said, I've subscribed since 2017. But, receiving a response is like pulling teeth, so I assume receiving a refund for my undelivered subscription will be as painful.

Hi Maria, thank you so much for your feedback. I’m so sorry to hear you ran into some shipment issues with your body oil being damaged during transit! We received your email, and are more than happy to send a replacement out for this! As we did mention in our messages, we did, unfortunately, sell out of August boxes super early this month, so in order to give new subscribers an opportunity to receive a subscription box before September began, we had sent out our Ancient Egyptian Wisdom boxes in its place. Hopefully, it would have also noted this in your confirmation email and above the subscription boxes on our site :)

If you have any more trouble, we’re happy to help at our support address...