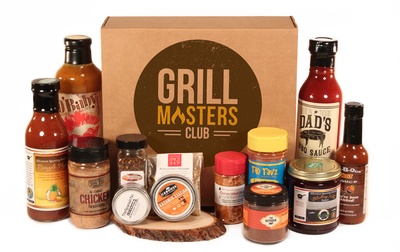 by Grill Masters Club
The best grilling and BBQ goods curated by a certified, award-winning Pitmaster
★★★★☆116 reviews
Plans as low as

The items are nice but for what I paid for box I thought it would be more to it.

According to the pamplet inside the box we should have gotten a bottle marinate for beef, but it was not it was for chicken

Got multiples of the same item.

Product did not match product card

I received the same wood chips as last month and the 2 rubs did not match the card that tells what was included, so the recipes are not helpful since they require rubs that were not in my box.

Description of box was " four full size items". Received three full size and a sample
bag of wood smoking chips. Bag was too small (about 2 cups)to get any benefit from it---went in the fireplace. The other three products were very good! So far disappointed and not worth the price but will give it another chance.

I dont think there is enough product to justify the price of the subscription. I will finish it but probably not renew unless the other boxes are better. I was underwhelmed.

The picture represents that you get many more items . There were only 2 sauces 1 wood chip and 1 packet of rub .
I was very disappointed with this, as it was a gift and I expected more since pictur showed more

Not a great value. Could leave out mesqu

I hate to say anything negative, but this was an expensive gift and disappointing. Even after a coupon it’s expensive. I gifted my honey this box for Fathers Day surprise but he was not excited. He was bummed to find mesquite chips as he uses his gas bbq grill religiously. It had a red sauce and a white sauce(BBQ) but red sauce tasted like plain ketchup. I really was not impressed. He used the Sweet Slobba rub the most. He said he would rather not order again. Also was a delay in shipping and it came after the holiday. I didn’t care. He didn’t like waiting and I had to contact them.

It was a great birthday idea...

I got this for my husband for his birthday - for 6 months. It's a great idea, but as far as the contents of the box- it's lacking.
The first box arrived and I was excited watching my husband opening it, then thought...'that's it?'
The picture on the website probably has at least 4 months worth of box content. Don't get me wrong, The items are good, but 2 bottles of sauce, 1packet of rub, and 1 tin of something else was not what I expected.