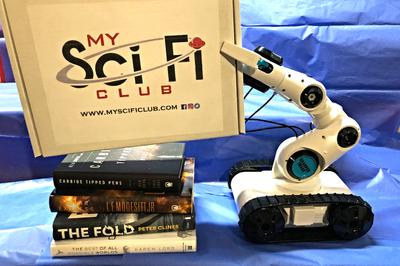 My Sci Fi Club
41 reviews
Your new favorite sci-fi and fantasy monthly book club! We ship in less than 48 hours, no waiting!
Plans as low as $16.00 / month
Buying Options

I bought this box for my husband as an X-mas gift after he read through Dune in just over a weekend. And there it was, a collection of Frank Herbert short stories! The other text was polar opposite tone and material wise, but I liked that variety and will probably borrow it from him.
My only complaint was the shipping/box. The tracking never updated and having "My Sci Fi Club" on the bottom of the box almost ruined the surprise because the mailman laid the package at an angle, visible.

Not a bad deal

Definitely good for the price, two hardback books and a DVD. Probably better for people who are starting a new collection. Still, I paid more for dinner last night than this box cost me and the contents were good quality items.

2 hardcover books and a movie. Never heard of any of them, or even the authors or actors. Don't know yet if I'll enjoy them, but at first glance it seems to be a good value for$15 shipped.

First, I ordered this box in April and states it ships the first week of the month but after it went into the second week and still no tracking information, I contacted them twice from this webpage and no response. I finally replied to an email I received for the MY THRILL BOX and ask them if they were the same owner and he said yes and told me my box would ship out that day or next day. After another week still no tracking information so I emailed again and he stated that item had been shipped. It finally showed up today. I am glad it showed up and I love the 2 books that were shipped and the DVD "Snow White" a version I had never heard of before, came in Blu-ray which was great, but I just wish when item are not shipped when supposed to be, an email would be sent saying there is a delay instead of just not responding. That was my only complaint that the shipping took so long.

I received two books, both hardcover, interesting, and in extremely good condition. However the pamphlet inside the box said I was getting a book on Celtic fairy tales and I got another fantasy book instead. Not exactly complaining since the book was still good, but just odd I got a different book. Again, still amazing quality books and definitely worth subscribing! :)