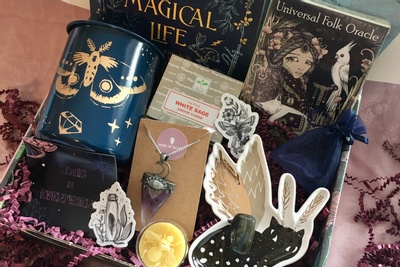 by Nine of Earth
A box for Tarot lovers, featuring full size decks, unique jewelry and more.
★★★★★98 reviews
Plans as low as

Worst Box I have ever received

This is the worst box I have ever received. It is still sitting in the table. I have ordered 4 different boxes from Cratejoy - they were all very nice and well packaged. Theywere so nicely packaged, I kept the boxes and pretty paper. The sellers were very kind and packaged everything so professionally. This particular box is awful. They products are cheap and look like they came from a thrift store/junk store. I can’t even give them away. I bought this box to give it as a gift. I opened it to check the items before giving it to the recipient. I would never give these items as gifts. I immediately contacted the seller to request a return or refund. Seller asked me what I expected to receive because there were pictures posted assuming I knew what I was going to receive. She also indicated there are no refunds as stated in the Cratejoy policy implying I did not read it and that I knew I could not return this subpar merchandise. I never considered returning previous merchandise because the past boxes from other merchants was great. Finally, she said she is a one woman show trying to support her family implying that accepting a return would jeopardize her business or her family. There are a few issues here. The first is there are several pictures shown. The pictures show some of items in this box but not all of the items and there are pictures of...

Hi Victoria,
You ordered the "LGBTQ Pride Celebration," box. Your email to me said  "I didn't like anything in it," and wanted a refund. I reached out to you sincerely apologizing for your disappointment. I politely asked for your feedback on what you weren't happy with, so that I could better understand and make it right for you. I also asked if you intended on ordering this box as there were two box options available for purchase. You never responded back. I was surprised as everyone else who has gotten this box has loved it, which led me to wonder if you were expecting to receive something different. I find it interesting that you purchased a Pride themed box and you say you didn't expect rainbow...