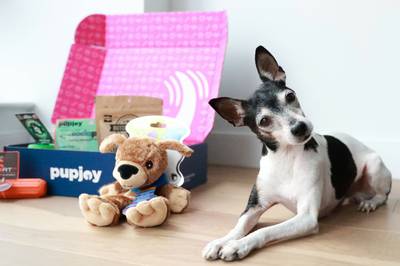 by PupJoy
The #1 rated subscription, custom-tailored for the needs of you and your pup.
31 reviews
Plans as low as

After six months I canceled my subscription because I literally received the same treats every month. At one point I had five bags of one treat and five bags of another. I contacted pupjoy twice about it but no one ever responded. I like to give my dogs a variety of treats so I was accumulating a backstock because again, they kept sending me the same things every month. In the last box I received, I actually got two bags of the exact same treat in one shipment! The whole point of a subscription box is to be able to try new things and this fails epically. Also, at one point they sent me some gross looking chew things that were made in India which I was not okay with. I returned them and in exchange they sent me two Wag collapsible water bowls... again, I get the box for treats, not for cheap promotional water bowls. They did end up sending me replacement treats, but again they were the same ones they had continually been sending me!!! It was driving me to the brink of insanity! The only thing I liked about the box is that you could choose to not receive toys, but who needs 17,000 bags of the same treats? BarkBox was going in a similar direction as far as not really a good variety (they would send their own brand of the same treat, just in a different shape or maybe flavor). At this...

Not Impressed At All

I am not impressed with this box. I originally choose this box because it offered a variety of toys, which I liked. I have a large dog and other dog boxes have provided toys that are "hard to destroy" and pretty much useless to play with. I appreciate toys that last but not if they aren't even interesting to the dog. But as with all the other boxes, this box sent my large dog useless toys. What is the point of having a "variety" selection if all I am going to get is the same type of toy?
I did email the company about my dissatisfaction, but they ignored me. The box isn't worth the money and the customer service isn't worth giving them the money.

At one time I was crazy about these boxes. I however stopped due to a move etc. I went back to them recently for several month. I was shocked to recieve the same toys and treats, the local shop were not apart of the boxes I recieved. Even with the discount the price is high to get the same toys your dog got last year. I left with lots of points which I really did not care I am losing money off. The toys are subpar for the news ones not counting I only got one box for 2 dogs and even though I live close to their shipping office they take forever to ship.
A sad review to two great guys who ran a great company when first launched 😭

They send the same toys over and over. Last month they sent a tiny leaf toy (my dogs are 90 lbs each). It was ridiculous. I have had to email them TWICE because they never mailed the box. They blamed it on the shipping company and said they would send another one. Yeah right. Even with the discounts you can get.... It's not worth it.