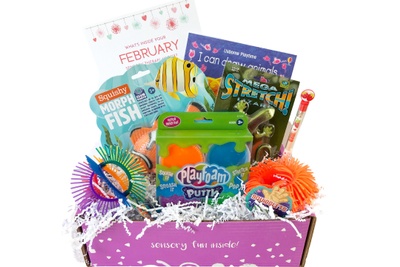 by Sensory TheraPLAY Box
A monthly Box with sensory toys to engage your child in fun, therapeutic play.
★★★★61 reviews
Plans as low as

I received my first box this week and it did have several engaging toys for children with autism. One of my concerns with my sensory box's items is that the box was not worth the $51.00 (with shipping) I paid for it. I truly love the idea and the toys, but not the cost.

I expected more from this box. Its not bad and probably at retail value, maybe a little under. But it was just very underwhelming. I'm going to give it another shot next month, and hope it was just an "off" month for them. Also, if you only have one child don't expect all the items to be in their age range...its better for a group of children across different ages. I've also watched several videos on this box before buying it and it looks like they send similar and even the same things quite frequently. Here's to hoping next month is better.

It's okay, but expected more value

Overall the toys were pretty fun, but it did not seem worth the $51 with shipping. I would say if the box was $10-$15 less it would definitely be worth it. I usually expect more of a value from the boxes we are getting. The kids had fun with the items. The frog game was a little difficult for my 3 year old's small hands, but they had a good time throwing the "bugs" around. My personal favorite was the pretty spinning toy, but that was hard for my kids to spin as quickly. My 6 year old liked the spike red roll thing (I can't remember what it was called). I ordered one more month to see if the value issue was just a fluke, but if not I'll probably cancel and hope that the price drops.

Really enjoyed the Sensory Theraplay box with my 3y old son. He especially liked the massager and everything else. Made for great family time. Thank you