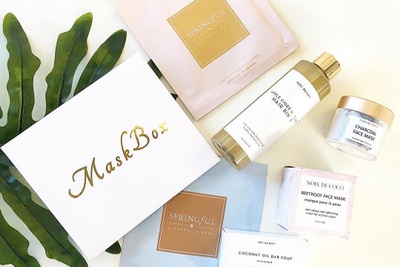 by Mask Box
A box of Korean sheet masks carefully selected by locals and doctors, shipped right to you!
★★★☆12 reviews
Plans as low as

I chose the 3-mask/hydration option. In my first box (it was actually an envelope), I received three different masks. All are from the Elensilia IntraCELL line and only one was labeled "hydrating." Super disappointing. I probably would've left a 3-star review.
However, my experience with the company (aka the owner) was incredibly DISTURBING and ABUSIVE. A simple request for an accurate tracking number was ignored; a second request was also ignored; meanwhile she accidentally CC'ed me on an unprofessional and flippant email in which she tried to block me from leaving a review by calling me "rude" (because I made it clear to them they were probably getting a bad review based on lack of communication).
The company's actions are fraudulent and duplicitous. I suggest Beauteque Monthly, Pibuu Box, or FMT (all available on Cratejoy); or Facetory, PinkSeoul, or KoSkinBeauty. All provide superior variety and selection more tailored to your needs, as well as fabulous customer service. I also suggest Cratejoy reconsider their relationship with the owner, quite probably the most incompetent business owner I've encountered in over four decades.

EDIT: My original review was removed. It was 100% true, so I’m just going to have to repost. AVOID THIS COMPANY. My first box contained three masks, all the SAME: the Elensilia-IntraCELL mask. ZERO variety, MEDIOCRE masks. Based on that shipment, I would’ve left a three-star review (it’s the WORST box I’ve ever received). However, the site’s owner, is a fraudulent liar who tries to avoid bad reviews by telling...

Save your money and time.

I'm convinced at this point that this box is a scam. I ordered (and paid for) a box, and have waited 3 months. I have not received even an envelope of three similar masks that others have reported. This was going to be a gift, that if enjoyed, I would have happily been a regular subscriber. However, given that the seller has had nothing but radio silence since my order, I STRONGLY RECOMMEND that you do not subscribe to this.

The box was sent to my 10 year old granddaughter instead of her mother... I have edited the address,,,, and will try for one more month -- But I understand there were only three masks in the box --- if that is typical I will probably cancel the subscription.