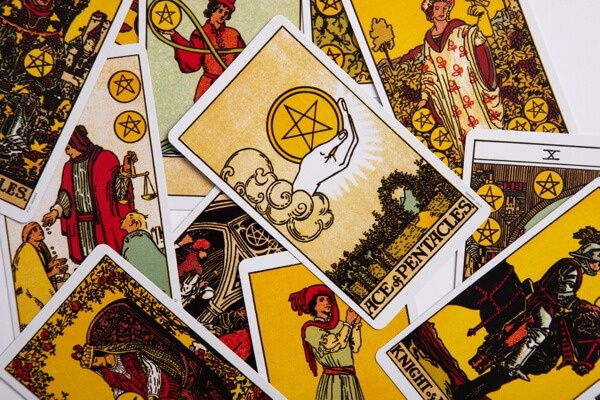 Interested in learning the ways of tarot cards? This guide to learning tarot will break it down for you on everything from the Rider-Waite deck to the Major Arcana, Minor Arcana, basic tarot spreads, and more. It's easy to start a tarot practice, but there's one thing to keep in mind: tarot readings are not fortune-telling. Think of tarot as a tool to better understand yourself and your situation, and you'll get more out of a tarot reading.

Reading tarot cards is an intuitive practice. In other words, you're using the cards to interpret your personal situation––tarot card meanings certainly help, but only you know the facts of the situation you’re thinking about when you ask your question. Use your own intuition as you compare a card’s meaning in your deck’s guidebook to the question you’re seeking to answer.

All that might not sound very, well, academic. Why bother reading the cards if you’re “just” using your own intuition? Well, intuitive tarot is a system, just like the alphabet. Each card serves as a framework to help you understand yourself better, just like writing helps you put your thoughts to paper.

And on that note: keep a designated tarot journal! As you learn the meanings of the Major and Minor Arcana cards, and do simple tarot spreads for yourself, write it all down in a notebook––one you don't use for anything else. This “tarot journal” will serve as your personal guidebook as you continue to learn tarot.

Start practicing tarot reading with a simple one-card spread in the morning. When you wake up, pull a card at random from your tarot card deck; this card will be your inspiration (or word of caution) for your day. When you take the time to study an individual card at a time, you can learn the meaning of the card more easily. Record the date, the card, the question you asked (something open-ended is best, such as "What can I keep in mind as my day unfolds?"), and the card's meaning, as well as your interpretation of how that meaning relates to your day.

When you're more experienced in reading the cards for yourself each morning, you can try more complicated tarot readings, like a three-card spread. The first card represents your past; the second, the present; and the third, your future. This is a simple tarot spread to gain clarity on a personal situation, and may offer more of a "story arc" as you record your readings in your tarot journal. A three-card spread is a good stepping-stone as you learn to interpret not only the individual cards, but how they relate to each other. Later, when you've aced how to weave a narrative out of all three cards, you can move onto much more complex layouts like the Celtic cross.

All About Tarot Decks

The difference between oracle and tarot cards? While a tarot deck has a designated order (and story arc) for its Major and Minor Arcana cards, an oracle deck can be themed and organized any way the deck creator likes.

You can find oracle decks about angels, animals, famous women writers, crystals, Rumi's poetry, the phases of the moon, fairies, goddesses around the world, and more. Oracle cards are similar to affirmation cards and better used for broader inspiration rather than specific guidance. For more specific help, look to the pre-determined stories in each tarot card.

Sure, it isn’t necessarily the prettiest. (Look at the Wild Unknown deck!! How could the standard Rider-Waite compare to those gorgeous line illustrations by artist Kim Krans?) But the Rider-Waite deck is a classic for a reason... and perfect for tarot beginners.

If you’re familiar with tarot at all––or have just seen movies with psychic reading scenes––you’ve likely seen the Rider-Waite. This deck, by far the most common tarot deck in circulation, was originally published in 1909 by the Rider Company, with art by Pamela Colman-Smith based on the instructions of mystical practitioner A.E. Waite. Many other, more recent tarot decks use the Rider-Waite as the inspirational basis for their own art, too, so it’s worth investing in it as your first deck. Familiarize yourself with the meanings of the Rider-Waite tarot cards first.

All About The Actual Tarot Cards

Whether the Rider-Waite or otherwise, the typical tarot deck has 78 cards: 22 cards in the Major Arcana, which consists of a series of different "characters" (or archetypes), and 56 cards in the Minor Arcana, which is made up of four different suits (Wands, Cups, Swords, and Pentacles). But what does all that mean? And why does it matter to tarot readers that the cards are organized like this?

The Major Arcana: From the Fool to the World

Let's start with the Major Arcana cards, the first 22 cards in the deck. These cards link together thematically to create a story arc––called "The Fool's Journey"––that mimics the human lifecycle, from the naivete of young adulthood to the wisdom of old age.

Here's a breakdown of the Major Arcana and the basic meaning of the cards:

Zero. The Fool: The main character of the Major Arcana

I. The Magician: Power and potential; a trickster figure

III. The Empress: The subconscious, the natural world, fertility, the heart

VI. The Lovers: Attraction, love, beauty, trials that have been overcome

XXI. The World: Happiness, success; mortality or the end of a chapter in one's life

It's important to remember that whatever the art on the card looks like, there's no such thing as a "bad tarot card" in the Major Arcana. Even if you draw––for example––the Death card, that's not exactly a bad omen, though it might feel intimidating to look at it. Instead, the Death card might indicate that you're starting a new chapter in your life––experiencing big changes like beginning a new job, having a baby, or moving to a new city.

*In some decks, the Strength and Justice cards are reversed in order, so Justice is #8 and Strength is #11.

In contrast to the Major Arcana, the 56 cards in the Minor Arcana aren't organized by a story arc so much as by theme. Each suit includes ten numbered cards plus four court cards: the Page, Knight, Queen, and King. (Some alternative decks choose to rename the court cards to something more familiar, such as the Son, Daughter, Mother, and Father cards in the Wild Unknown.)

Let's take a closer look at each suit below.

The Suit of Wands

First up is the Suit of Wands, which deals with the creative side of life. And no, you don't need to be an "artist" or "creative person" to be impacted by these cards! The Wands cards represent your dreams and sense of purpose––the passions that motivate and inspire you.

The Suit of Cups

The Suit of Cups represents your feelings, imagination, and inner emotional life. As a result, tarot readings that involve the Cups often focus on your relationship to loved ones, whether a partner, your family, children, or a close friend.

The Suit of Swords

Reminiscent of a sword's sharp blade, the Suit of Swords deals in the sharpness of the mind. These cards are all about power and intellect: your thoughts, beliefs, knowledge, and how you communicate them. This can cover everything from mental health to well-kept secrets, how you approach other people, and more.

The Suit of Pentacles

The final suit in the tarot deck, the Suit of Pentacles corresponds to abundance, prosperity, and material possessions. "Pentacles" is just an old term for "coins," so many alternative decks call this the Suit of Coins. When Pentacles cards come up in a tarot reading, it's likely referring to your health, financial situation, or career.

Tips to Keep in Mind

Whichever deck you start with––whether the Rider-Waite or something else––you'll be all set to learn tarot with these basic rules.

Start small and keep track of your simple tarot spreads, like one- and three-card tarot spreads, in your tarot journal and write down its meanings (plus your own interpretation) from the tarot books that come with each of your decks. You'll be doing a Celtic cross spread in no time!

See all our tarot subscription boxes in the full collection.